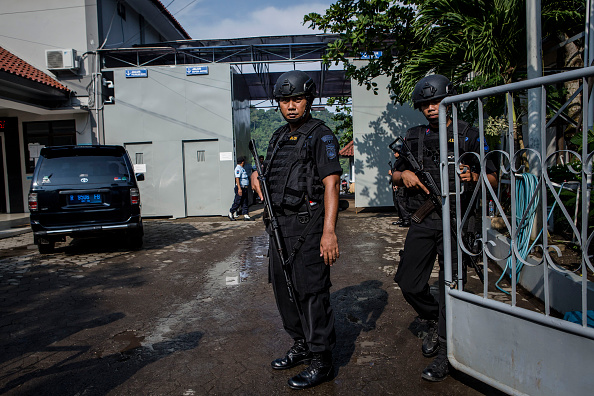 CILACAP, CENTRAL JAVA, INDONESIA – JULY 28: Indonesian police stand guard at Wijayapura port, the entrance gate to Nusakambangan prison, ahead of a third round of drug executions on July 28, 2016 in Cilacap, Central Java, Indonesia.

According to Yahoo, Noor Rachmad, Deputy Attorney General for general crimes, told reporters that they were shot by firing squad at the Nusa Kambangan penal island shortly after midnight (Indonesian time) amid pouring rain.

“The executions were for now conducted on four convicts on death row.

This is not a fun job. For us, this is really a sad job because it involves people’s lives.

This was done not in order to take lives but to stop evil intentions, and the evil act of drug trafficking,” Rachmad said.

The attorney general’s office had said late Wednesday that 14 convicts would be executed “soon.”

The Community Legal Aid Institute, which advocates for the convicts, said “those facing execution are six Nigerians, four Indonesians, two Zimbabweans, one Indian and one Pakistani.”

Indonesia’s Foreign Ministry spokesman, Arrmanatha Nasir, said the convicts had been given their rights according to the laws.

He insisted that the death penalty being applied in Indonesia was not against international law.

Nasir said those sentenced to death went through a legal process and that they were big traffickers, not users.

He pointed out that 121 people were on death row in Indonesia, including 35 foreigners, mainly for drug-related crimes.

Nasir said the president had taken tough stance against drug trafficking since his election in 2014, adding that the country was facing drug emergency.

The lawyer of Pakistani convict, Saut Rajagukguk said it was not clear if his client, Zulfikar Ali was spared because of a last-minute appeal or whether his execution had been postponed because of rain.

The executions were the third set carried out since President Joko Widodo took office in October 2014.

Widodo refused appeals for clemency from relatives of the convicts and ignored calls for a halt to the executions from rights groups and the United Nations.