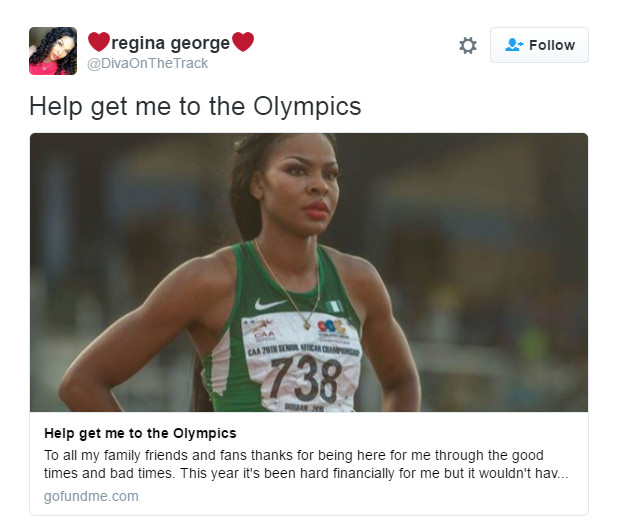 This is not the kind of report we ought to be getting, but sadly we are.

There have been reports that there were no funds for Nigerian athletes for the 2016 Rio Olympics. House of Reps members had also called for immediate release funds to the Ministry of Sports to facilitate the country’s preparations at the 2016 Rio Olympic Games earlier this month.

Apparently the funds have not been released and athletes have resorted to social media to call for sponsorship. The 2016 Rio Olympics starts in 14 days time, from August 5th – 21st.

One of such athletes is Regina George who was selected to represent Team Nigeria in the 4 x 400m relay. According to her, the government said they will have to sponsor themselves to Rio and will get a refund later.

She opened a GoFundMe page seeking for help so that she can represent her country. She wrote:

To all my family, friends and fans, thanks for being here for me through the good times and bad times.
This year it’s been hard financially for me but it wouldn’t have been possible without your support.
I’ve just been told that we will have to pay our own way to the Olympics this year.
Sadly this is such short notice for me to come up with the money.
They also promised a refund but I’m still waiting for many refunds promised in the past.
I’ve been through a lot of obstacles this year and through it all I got into the Olympic team for the second time.
I don’t want to stop now after I earned a spot to represent my country in the Olympics. Any donation will help my situation.
This will not go unnoticed and I’m truly grateful for my supporters. Help spread the word!

Another athlete, Seye Ogunlewe Jnr, is also calling on corporations and the general public for sponsorship for the olympics. 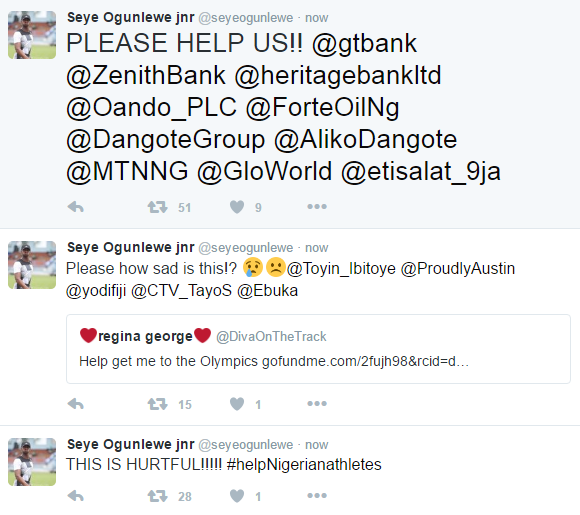