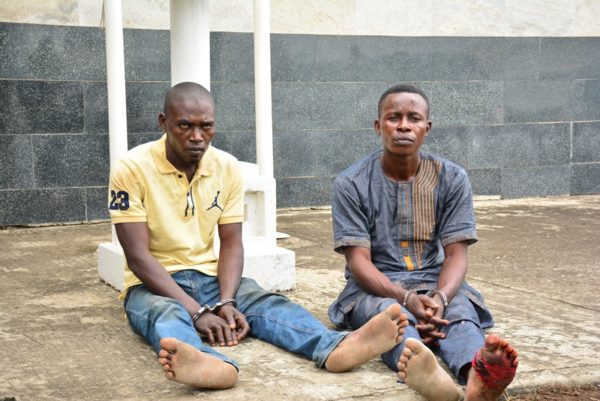 The suspected kidnappers of the Oniba of Iba, Toba Forejo (right) and Isaiah Ododomu (left) being paraded by the Police, at the Lagos House, Ikeja, on Sunday, August 7, 2016.

The family of the abducted Lagos monarch, Oba Yushau Goriola Oseni, has said that an undisclosed amount was paid as ransom before his release on Saturday night.

The monarch’s son, Saheed Oseni, who confirmed the release, told the News Agency of Nigeria (NAN) that the first class traditional ruler returned to his palace “hale and hearty”.

‎Oseni said the family had decided not to disclose the amount paid as ransom but confirmed that the family paid to secure the release of the kidnapped royal father.

“We paid an undisclosed amount for his ransom which the family sourced without the involvement of the Lagos State Government‎,” he said.

However, Isaiah Ododomu, one of the suspected nine kidnappers on Sunday in Lagos confessed to newsmen that they received a N15.1 million ransom in two batches.

Isaiah said this while he was paraded before newsmen at a news conference addressed by Governor Akinwumi Ambode of Lagos State at Ikeja.

Ambode was represented by the state Attorney-General and Commissioner for Justice, Adeniji Kazeem.

Isaiah said that they received an initial ransom of N12 million and a subsequent ransom of N3.1 million.

He, however, failed to mention who gave them the amount, where and when.

Isaiah also told newsmen that he and others were into illegal bunkering before they kidnapped Oseni.

“I was involved in illegal bunkering. As this government stopped bunkering, our leaders arranged another group and this mission of the new group was to start kidnapping and use it to manage ourselves since we can’t do oil bunkering again.

We had to stop the business because of the renewed onslaught of government’s security agencies against us. I am a married man, I don’t have any job to do. We used to do security for those main guys and anytime they make about N500, 000 they will give us like N20,000,” he said.

According to my father, the kidnappers had put him in a canoe and asked him to paddle it to the other side of the river‎, which he did.

“On getting to the other side of the road and confirming ‎the location where he was from passerby, he discovered that he is on Iba expressway and that was how he found his way home,” he said.

The prince said the family was grateful to God for the release and safe return of the traditional ruler.

Oseni said the family also thanked the Police and other security agencies for their efforts which led to his release.

He added that the king was in good health condition since his return home.

The state Commissioner of Police, Fatai Owoseni, while answering questions from newsmen on whether or not ransom was paid to seek the release of the Oba, said the most important thing was that the traditional ruler was rescued alive.

It was not a matter of whether ransom was paid or not, he said.

“What matters is that the Oba is back in his palace safe, hale and hearty,” Owoseni said.

The police boss said the success rescuing of the Oba was made possible by the combined pressures from all security apparatus of the state on the kidnappers.

Owoseni, however, declined to comment further on the matter and the security agency’s operational strategy since its investigations were still ongoing.

Oba Oseni was kidnapped from his palace on July 16 at about 8PM.  In the process, two persons were shot dead by the kidnappers.

The kidnappers had asked the Oba’s family members to pay them a N500 million ransom after almost a week of their kidnapping him.

“I believe Dogara, 12 House Members, Others want to Kill me” – Hon. Jibrin

Kerosene is N150 per litre from NNPC depots, says NUPENG