Man who named Dog Buhari: "The President must be having a good laugh over this whole thing" - Presidential Spokesman 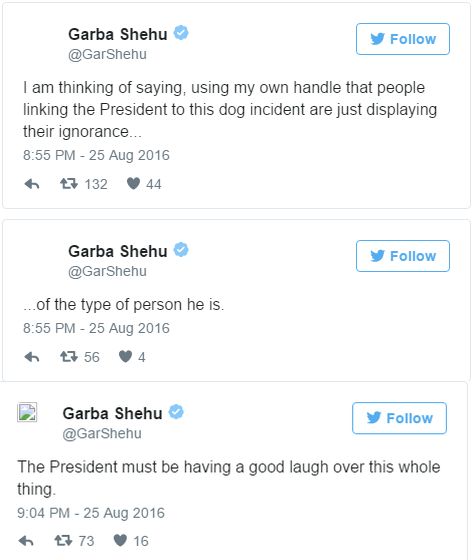 The Senior Special Assistant to President Muhammadu Buhari on Media and Publicity, Garba Shehu has said that the president must be having a good laugh over the issue of the man arrested for “conduct likely to cause breach of the peace”  after he named his dog “Buhari” in Ogun state.

He said this while reacting to reports linking the president to the incident.

I am thinking of saying, using my own handle that people linking the President to this dog incident are just displaying their ignorance of the type of person he is

He enjoys cartoons and likes sharing them. The  ones he enjoys the most are those that caricature him. It is cheap and sensational to say he can order a police action against a caricature.

When he picks a paper, the first page he reaches for is the cartoon page. He laughs and laughs.

The President must be having a good laugh over this whole thing.

People should listen to the real story behind this dog incident and to not waste precious time seeking the hand of the President in a laughable incident!

Meanwhile, Vanguard reported on Thursday that the trader, Joe Chinakwe has been released after perfecting his bail conditions.

He was released around noon on Thursday and went straight to his residence in Sango-Otta, Ogun State.

Chinakwe was granted N50,000 bail by a after he was charged with intention to cause breach of public peace before Bolaji Ojikutu of the Sango-Otta Magistrates’ Court.

The Man who named his dog Buhari by Reuben Abati