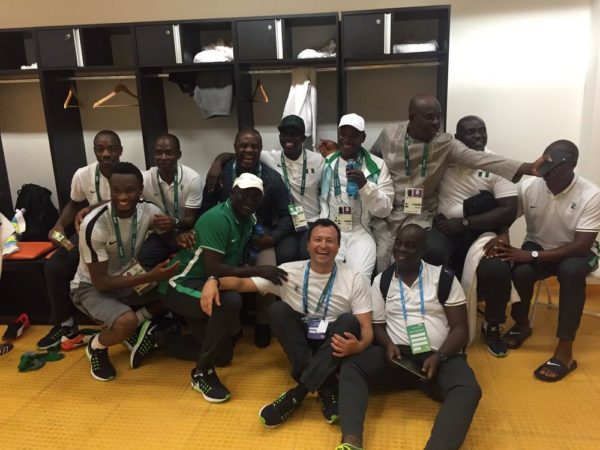 Solomon Dalung, the Minister Youth and Sports, on Monday apologized to players and officials of Nigeria’s Olympic football team, Dream Team VI, for the circumstances that led to their late arrival in Brazil.

Dalung tendered the apology in the dressing room after Nigeria’s 1-0 victory against Sweden in their second group B match.

With the victory the Dream Team VI had reached the last eight of the Men’s Olympic Football event at the ongoing Games in Brazil.

“I want to apologise for all the circumstances that led to your late arrival here. I apologise because I am the head and as such I must take responsibility for anything that happens under my watch.

I want to assure you that we appreciate your efforts, and I want to say that it’s when a man faces challenges that his true ability is tested. I am sure we all have learnt our lessons and will take the lessons to heart going forward”.

He added that Dream Team faced similar challenges on their way to winning the Africa U23 Cup of Nations in Senegal last year, which qualified Nigeria for the Olympics.

Dalung assured the players and officials that all bonuses and allowances due to them will be paid.

Responding, team captain Mikel Obi assured the Minister that the team will not lose focus as their target is to win the gold medal for Nigeria.

Nigeria will play Colombia on Wednesday at the Arena dos Corinthians in Sao Paulo in their final group match.

Nigeria is drawn in group B with Japan, Sweden and Columbia.

The 2016 Summer Olympics games which started on August 5 will end on August 21.

Hajj: 80,000 pilgrims to be transported to Saudi Arabia in 5 weeks – FAAN official

Did You Miss the Historical London Debut? Watch Highlights of “Wakaa! The Musical” on BN TV