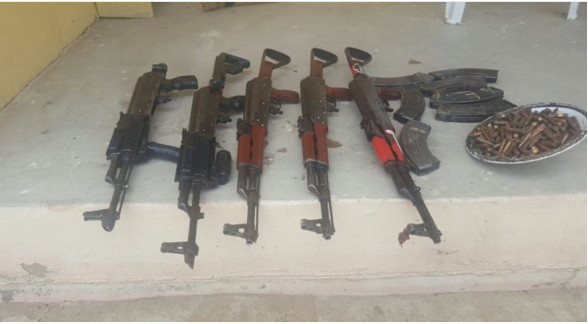 The Nigerian Army on Sunday said it had recovered cache of arms and ammunitions in Gamboru.

This is contained in a statement signed by Col. Sani Usman, Ag. Director, Army Public Relations, and made available to newsmen on Sunday in Abuja.

The statement said the troops conducted raids at Gamboru town early on Sunday morning following a tip off.

The Nigerian Army wishes to commend those good citizens that alerted the military for the timely and useful information that led to this recovery.

This is the type of cooperation and support we always require from citizens of this country to enable us clear the remnants of Boko Haram terrorists.

We wish to reiterate the need for all to be more vigilant, security conscious and report any suspicious movements or persons to the nearest security agency,” it said.

The statement said that troops on Operation LAFIYA DOLE on Saturday night carried out successful ambush against Boko Haram terrorists at a crossing point off Damboa road.

“The ambush party decisively dealt with the terrorists riding on bicycles at a crossing point off Damboa-Kubwa road towards Multe village axis. The team killed one terrorist, while others escaped with gunshot wounds.

The troops recovered 1 AK-47 rifle with registration number 565907530 and 14 rounds of 7.62mm (Special) ammunition, a wooden Dane Gun shaped to the resemblance of an AK-47rifle, 1 fabricated double-barrelled pistol and 4 bicycles,” it added.