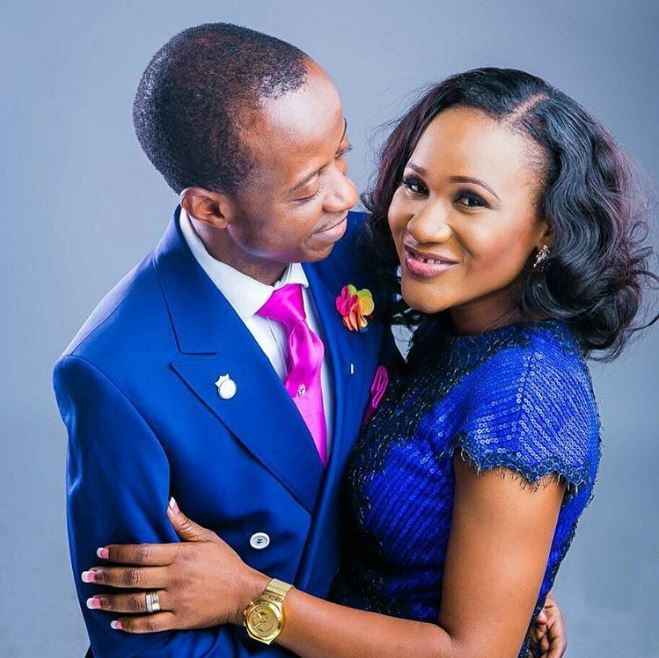 Sunmbo Adeoye, wife to Pastor David Adeoye and mother to 2 of 2Baba’s children was featured in a recent interview with Punch Newspaper.

In the interview, she talks about getting pregnant for the singer, having his children, how her first marriage broke up and meeting her loving husband.

Here’s an excerpt of the interview:

On how she met 2Baba:
I met him when I was a student of Yaba College of Technology. I had just lost my dad and my mum was living in America. For someone who was a daddy’s girl, I needed love. This was the only person that was showing me love at that time. I feel I had that experience so that other young girls would not make the same mistake.

On getting pregnant for the singer:
I was 24 when I fell pregnant the first time and having to deal with ‘shame’. When I got pregnant the first time, I approached the pastor of the church I was attending then and he brought me out before the church and judged me. I was asked to go and bring the father of my unborn child so we could be joined together. I brought a different person and we got married at the registry.

On how that marriage failed:
Everything fell apart when I had a child who looked nothing like him and my mum came back from America to ask who gave my hand out in marriage because she was not a part of it. I had to walk out of the marriage which I arranged by myself. I moved back home and by age 25 I was already a single mum and a divorcee. There was so much shame and reproach.

On deciding to return to 2Baba:
It got to a point in my life that I felt that the devil you know is better than the angel you don’t know, so I went back to my baby daddy and his mum talked me into living with him so he won’t have more women and babies. We lived together for three years and that was how the second pregnancy happened.

On leaving 2Baba:
It was not a bed of roses while I was there because I was trying to put together what was not supposed to be. I think we broke up in 2009 after I had the second baby. There were other women who were also going to have babies for him around that time. I came to my senses like the prodigal son and I was so broken. I think my baby daddy was out of the country that fateful day when I returned from work and I packed all my things plus that of my children, and I went back to my parents’ home.

On meeting her husband:
It is so funny because he had always been my pastor. He is someone I always went to for mentorship, so when he came across as wanting to be my husband, I was a bit scared. Even though I knew I was asking God for a husband, a father, friend and mentor, I did not know it was my pastor that was going to fit in because nobody was praying for his wife to die. When he made his intentions known, I thought maybe if I stayed away from church, he would forget about me. I realised that whenever I stayed away from church, I would lose my peace. I was a committed member of the church as well as the praise team lead. Then, I started praying and fasting. I began to ask God if it was what He wanted for me. I knew my past and I told God I was going to drop my tall, dark and handsome standard for whatever He wanted for me.

On life with her husband:
It is a privilege that comes with a lot of glory and responsibilities. It also comes with a lot of glamour and commitment. It comes with its own challenges and God has equipped us to handle everything. This is not the Sunmbo that got married to Pastor Adeoye three years ago. I am a better person and I am now refined.

On starting her foundation, Esob Heroes:
The fact that somebody helped me to access the Goldman Sach’s scholarship helped my business to grow. I thought that if God availed me this privilege, why don’t I extend a hand of fellowship to other women and support entrepreneurial ideas. I made up my mind to help improve people through mentorship and advisory services. I also started a movement whose focus is to ensure that the future of the girl child is safe and secure. We have supported, learned and unlearned people by empowering them with work tools and cash gifts.

On the transition from being an entrepreneur to the wife of a general overseer:
Everything just fell into place. You can never be prepared for becoming a mother until you are delivered of the child and you begin to care for the child. When I was a mum and a banker was a different phase from when I became a mum and an entrepreneur. That was also a different phase from when I became a wife, mother , entrepreneur and running the NGO on the side. If it is God that has called me to do all of these, He has equipped me before now. But I keep learning and improving. I have mentors who are doing all that I do better and I look up to them. My husband is my number one mentor and Pastor Nomthi Odukoya is another person I look up to. The Internet is big and you can learn from people who you are not even friends with but are connected to through the social media.