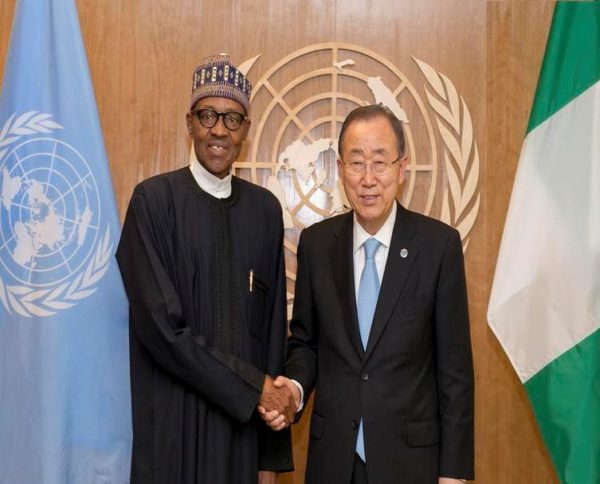 President Muhammadu Buhari has said that Nigeria will welcome intermediaries from the United Nations (UN) on the proposed swapping of the abducted Chibok schoolgirls with Boko Haram Terrorists held in custody.

The president made the proposal at a meeting with the UN Secretary General, Ban Ki-moon, on the sidelines of the 71st UN General Assembly in New York.

The  President’s Special Adviser on Media and Publicity, Femi Adesina, confirmed Buhari’s position in a statement in Abuja on Thursday.

The president said the decision to welcome the UN was to show the administration’s commitment to get the girls released.

He said the government was willing to bend over backward  to get the Chibok girls released from captivity.

Buhari, however, noted that “The challenge is in getting credible and bona fide leadership of Boko Haram to discuss with. The split in the insurgent group is not helping matters. Government had reached out, ready to negotiate but it became difficult to identify credible leaders. We will welcome intermediaries such as UN outfits, to step in.”

The president reiterated that the teachings of Boko Haram were far from being Islamic, as neither Islam, nor any other religion, advocated hurting the weak and innocent.

“The fact that they kill men, women, children, and other people wantonly, and shout ‘Allahu Akbar’ (God is great) shows that they do not know that Allah at all. If they did, they would not shed innocent blood,” Buhari said.

He thanked Ban for the moral and material support given to Nigeria, which had enabled the country to surmount many of its challenges.

In his response, the UN Secretary General congratulated Buhari on the anti-corruption war of his administration.

“You are highly respected by world leaders, including myself. Your persona has given your country a positive image.”

He said the UN recognised the achievements of Buhari’s administration against Boko Haram and urged that “human rights be upheld always to prevent a repeat of the scenario being witnessed in Syria.”

Ban also thanked the Nigerian leader for his commitment to issues on climate change, adding that the government should “own the Sustainable Development Goals,” for the good of the citizens.