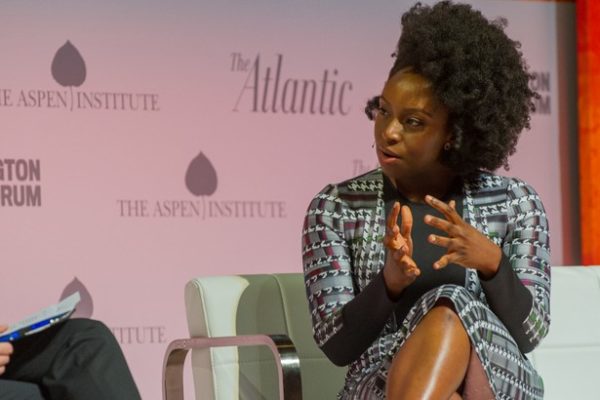 Chimamanda Adichie was recently at the Washington Ideas Forum, an event produced by The Aspen Institute and The Atlantic, and there she spoke about how much the killings in America have affected her writing.

After Americanah, the writer started a blog called “The Small Redemptions of Lagos,” , the idea was to keep up the commentary and voice of Ifemelu who was her protagonist in “Americanah”. In the book, Ifemelu had a blog called “Raceteenth or Various Observations About American Blacks (Those Formerly Known as Negroes) by a Non-­American Black,” and it was as funny as it was insightful.

Talking about this she says

“I think what’s going on now just doesn’t give me room for humor. I think that I’m so emotionally exhausted by the murders that I don’t think I could find any space to wrap humor around what’s been happening in the past one year, two years. It’s not just that you shoot a man who’s unarmed, it’s that you handcuff him when he’s clearly dying. There’s something about it that’s so unforgivably inhumane and to think that his race is part of the reason … I really do think that one of the terrible things about racism in this country, is there’s a sense that blackness isn’t really seen as fully human in many quarters. I think that’s why these things happen. I think that’s why a man who is dying is handcuffed, that’s why a boy who is dead is left on the street for hours. It makes me wonder: What’s happened to that part of us that is good?”

Related Topics:Chimamande Adichie
Up Next