Adele opens up about her Struggle with Postpartum Depression

All the Fun Moments from Ify Okoye's 30th Birthday Bash

Music star Adele is the cover star of the latest issue of Vanity Fair and in the magazine the mum of one opens up on how she battled postpartum depression and more.

Here’s what the 28-year-old entertainer had to share with the mag:

On her battle with postpartum depression: “I had really bad postpartum depression after I had my son, and it frightened me. […] My friends who didn’t have kids would get annoyed with me…whereas I knew I could just sit there and chat absolute mush with my friends who had children, and we wouldn’t judge each other. One day I said to a friend, ‘I fuckin’ hate this,’ and she just burst into tears and said, ‘I fuckin’ hate this, too.’ And it was done. It lifted. My knowledge of postpartum—or post-natal, as we call it in England—is that you don’t want to be with your child; you’re worried you might hurt your child; you’re worried you weren’t doing a good job. But I was obsessed with my child. I felt very inadequate; I felt like I’d made the worst decision of my life. It can come in many different forms. Eventually I just said, I’m going to give myself an afternoon a week, just to do whatever the fuck I want without my baby. A friend of mine said, ‘Really? Don’t you feel bad?’ I said, I do, but not as bad as I’d feel if I didn’t do it.” 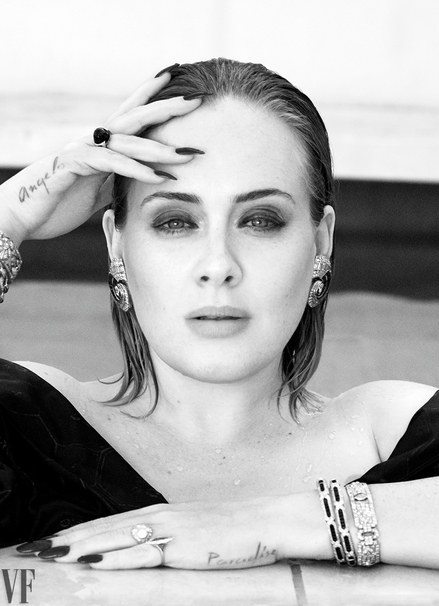 On making more music: “I’d still like to make records, but I’d be fine if I never heard [the applause] again.”

On drinking less: “Having a hangover with a child is torture,” she says. “Just imagine an annoying three-year-old who knows something’s wrong; it’s hell.” She goes on to say, “I used to love to be drunk, but as I got more famous I would wake up the next morning and think, What the fuck did I say and who the fuck did I say it to? […] I can see from an outsider’s perspective that I will never write songs as good as the ones that are on 21, but I’m not as indulgent as I was then, and I don’t have time to fall apart like I did then. I was completely off my face writing that album, and a drunk tongue is an honest one. I would drink two bottles of wine, and I would chain-smoke. Then I’d write the lyrics down and the next morning think, Fuck, that’s quite good. Then I’d find the melody. But since I’ve had my baby, I’m not as carefree as I used to be.”