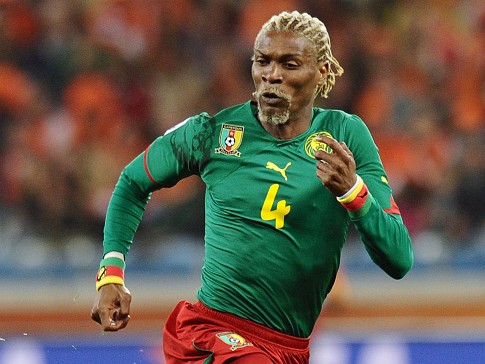 Rigobert Song, 40, a former Cameroonian international is critically ill in hospital after suffering a severe stroke.

Song, who played for West Ham and Liverpool,  was raced to hospital in Yaounde, Cameroon, yesterday with a brain aneurysm.

The married father of four was at his home in the Odza district of the Cameroonian city when he suffered the stroke.

Song, who currently serves as head coach of Chad’s national team, was also a former captain of the cameroonian national football team.

He was rushed to hospital in a critical condition

The player’s former team mates flocked to social media offer their support for the star.

Ex-Liverpool striker Robbie Fowler said in a tweet: “Thoughts with #RigobertSong and family… Hope he pulls through”, while former Cameroon striker Samuel Eto’o wrote: “I wish you a lot of courage and to get well soon, big bro.”

Jamie Carragher also showed his support for the star, tweeting: “Hope everything ends up ok for #rigobertsong.”

Related Topics:#RigobertSongRigobert Song
Up Next

Devalue the Naira to Get out of Recession – EU Official