Court Strikes Out Forgery Suit Against Saraki, Ikweremadu & Other Defendants 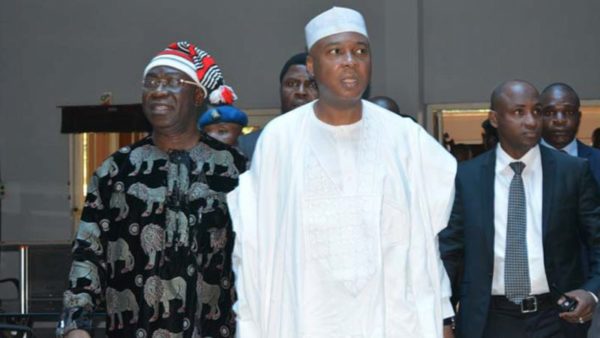 An FCT High Court on Friday struck out the Federal Government’s forgery charges against Senate President Bukola Saraki and his deputy Ike Ekweremadu.

The Federal Government had on October 5th, amended the charge to prosecute only former Clerk of the National Assembly, Salisu Maikasuwa and his deputy, Benedict Efeturi, who were included in the original charge. But today, the prosecuting team prayed the Court to strike out the original and amended charges

“I have heard the application presented by the Aliyu Umar (SAN), the Prosecuting counsel, asking for the withdrawal of  forgery charges against these four defendants.

I have also listened to the positions of the counsel to the defendants and to the effect that objections were not raised.

The court, therefore, has no option but to grant the prayer sought. The initial charges and the amended charges are hereby struck out, the four defendants are hereby discharged,” Haliru held.

Earlier, the prosecuting counsel had while presenting the application, said it had become imperative to withdraw the charges in order to avoid a “flagrant’’ abuse of court process.

Umar submitted that the prosecution had come to the realisation that a similar matter was pending at the Federal High Court, Abuja.

“This administration under President Muhammadu Buhari is committed to upholding the rule of law and respecting the hierarchy of the judiciary.

We have discovered that pushing with this case will amount to allowing two courts with coordinate jurisdiction to entertain a matter with similar issues that will bring about conflicting decisions.

I, therefore, urge the court to in view of the above fact strike out the amended charge filed on October 5 and the original charge filed June 10,’’ Umar said.

Following the development, Saraki and Ekweremadu issued a statement describing the verdict as a welcome development and a vindication of their position from the beginning of the case that they are innocent of the accusations leveled against them.

The presiding officers of the upper chamber of the National Assembly said the court decision was consistent with their position that the case lacked any merit and that the charge of forgery of the Senate rule filed against them can never be substantiated by any fact.

The two men described the case as a “politically-induced distraction” which came at a time when all hands must be on deck to solve the problem of economic recession biting the people, destroying homes and creating severe social disorientation in communities.

They however acknowledged that the Federal Government finally displayed courage and strength of character in halting the unnecessary waste of precious time of both parties by agreeing with the defence team that the case lacks merit and therefore should be discontinued.

“We express appreciation to all our colleagues in the Senate for their solid support and understanding while the case lasted. We also thank other parliamentarians in and out of the country and the international community as a whole for the consistent solidarity they displayed to us and their belief in our genuine cause since the commencement of the case.

Our gratitude goes to our legal team, family members, friends, supporters, civil society organisations, members of the bar, the media and the generality of the people, many of who came out to add their voice to the fact that what the nation needs at this period of economic crisis is not a distraction or any show of division but a clear signal that all arms of government are ready to co-operate with one another to find solutions to the nation’s economic recession.

We believe much time has been wasted in pursuing this needless case and we hope that the same treatment will be extended to other politically-motivated cases. It is also hoped that from now on, the various arms of government will be allowed to devote all the available time and resources to working on the problems confronting the country and finding solutions that will lead to higher standards of living for the majority of the people of Nigeria.

At this point, what the country needs is a strong economy where a very large percentage of those who are willing to work can be productively engaged; where there is solid infrastructure, where the atmosphere brings the best out of the people and where all are able to realize their full potential. We pledge to work for Nigeria to achieve all these,” they stated.