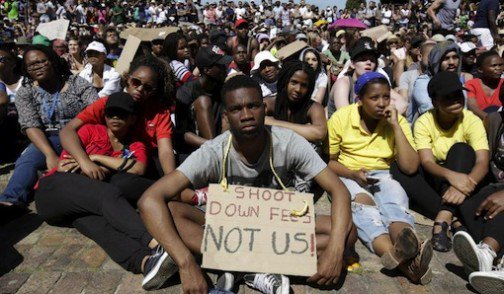 South African students protesting high tuition fees have demanded that all universities be shut until the government provides free education, Johannesburg’s University of the Witwatersrand (Wits) said on Friday.

The protests have forced Wits and Cape Town universities to suspend classes twice in less than a month.

However, Wits was aiming to reopen on October 10 after police, earlier this week clashed with student demonstrators on the campus.

The institution said that it had no agreement from the students that the academic programme will continue on Monday.

Wits suspended a general assembly scheduled for midday Friday to thrash out differences.

The cost of university education, prohibitive for many black students, has become a symbol of the inequalities that endure in South Africa more than two decades after the end of apartheid.

Related Topics:south africaSouth African Students ProtestUniversity of the Witwatersrand (Wits)
Up Next

Court Strikes Out Forgery Suit Against Saraki, Ikweremadu & Other Defendants