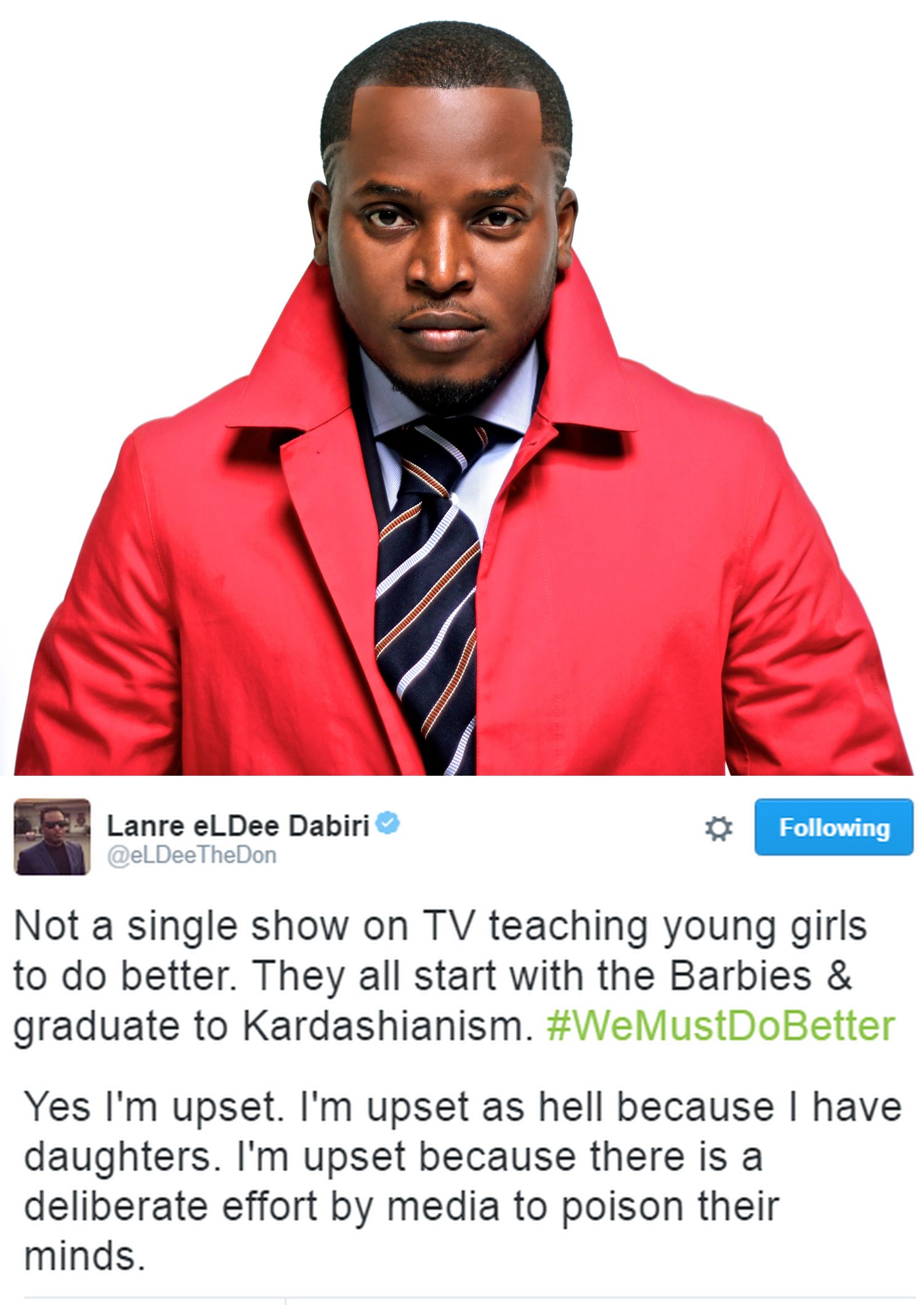 Tech entrepreneur, musician and Father of two, eLDee spoke his mind on a hot topic on Twitter and it has become a trending topic.

Many have reacted against and supporting his views on what/who should be a kid’s influence.

Here’s what he had to say:

#AmberRoseSlutWalk?? What are we doing to our children on this planet? Making hoes role models for young black girls is now hip???

Young black girls now being further encouraged to aspire to be sluts/hoes/sex workers. $8m to be a hoe evangelist? Wake up people!!!

TV shows survive on ratings. Stop supporting the platforms that are put in place to destroy your children’s futures by watching these shows.

There’s NOTHING positive about using a professional hoe to teach children anything but how not to be a hoe. Slutwalk?? Who r they fooling??

I have young daughters & the constant promotion of these hoes as black role models is a direct propagandist threat to their future.

Is there nothing positive going on with black women?? Where are the Silicon Valley success stories? Doctors? Real estate moguls? WhyHoes???

Yes I’m upset. I’m upset as hell because I have daughters. I’m upset because there is a deliberate effort by media to poison their minds.

I have no personal problems with Amber Rose & Im not judging her lifestyle choices, just stop making them “OK” options for little girls.

Not a single show on TV teaching young girls to do better. They all start with the Barbies & graduate to Kardashianism. #WeMustDoBetter

See some of the reactions to his tweets:

Honestly, in 2016, you guys underrating the impact of the media on kids are delusional. Completely delusional!

LMAO @ Eldee.
He really trying to shame “hoes” now as if it’s not him that loves them.
Sit all the way down please.

Like it or leave it. Eldee said the truth. But the saddest part is Daddy Eldee this is just the beginning a lot has changed…

Eldee smh,
You are using half naked girls in your videos and you are coming to talk,
*old videos , when you were relevant

Kim Kardashian is not a ‘hoe’ though. Just someone’s wife, someone’s mother, with a ‘not-too-palatable’ past. Like many of us.

If you don’t realise that Amber Rose and Oprah Winfrey deserve the same amount of respect, you’re a moron.
They’re both women.
End of.

This issue Eldee raised is very important, VERY. If you can’t think for yourself, think for the next generation

All in all. ELDEE is notttttt a failed artist. You either started listening to naija music yesterday or you are choosing to be silly.

How do you define Hustle? The characters of DStv’s newest show spill the Beans!