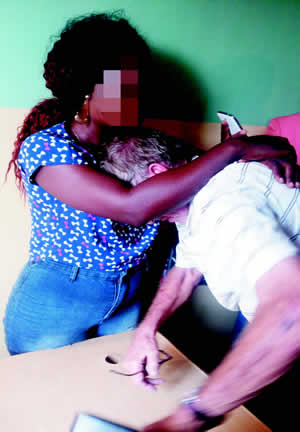 The Lady and Her Lover

A 31-year-old distraught Real Estate worker has narrated how her 67-year-old Irish lover allegedly intentionally infected her with HIV in Lagos.

According to PUNCH, the lady reported the incident at Area F Police Command, Ikeja

“When she faced journalists on Friday, however, things took a dramatic turn as she screamed at reporters and shielded the man she had accused from being interviewed and photographed.

‘You see what you have done now? We could have settled this at home,’ she was heard telling the man, who also became furious and lashed out at reporters.

‘Jackass, liars. Get out of here,’ the Irish man told journalists,” PUNCH reported.

Narrating what happened, the lady said:

We have been dating for some years. I work as a real estate agent, while he works with a construction company.

In January 2014, he became ill. He was always sweating and running temperature. So, I accompanied him to see his doctor in a hospital in Ikeja. He was given treatment for malaria but the hospital also ran some tests and usually, they run HIV tests without telling the patient just to be sure.

When the result came out, we went to see the doctor. I heard the man asking him if I was his sex partner but he said no. The man also asked if he could speak with him in my presence, he said no. When we left, he was given some drugs, which he hid from me.

Any time he wanted to take the drug, he hid it. Then one day, I caught him taking the same drug. I asked him what it was for and he said it was for a recurrent leg pain he was getting. I wrote down the name of the drug and searched for it on Google. That was when I learnt that it was anti-retroviral drug used for HIV.

I confronted him and asked if he had HIV, he denied it flatly. I then told him to give me his doctor’s number so that I could confirm myself. He said no. While he was sleeping, I took his doctor’s number from his phone and called the man. The doctor told me that he could not speak on the phone and said I should come and see him. When I went there, he broke the news to me that he was HIV positive. He then decided to run a test on me. It confirmed that I was HIV positive. I felt like dying.

I was so angry because he deliberately infected me. I know this because he protected his family. Around the time we went to the doctor together, he sent his wife abroad to ensure she did not contract the virus. But in my case, the sex even intensified that I was happy that he was falling in love with me more every day.

She added that she took a second test which came out positive as well.

She said: “He denied that he infected me and even accused me of infecting him even though the doctor said this could not have been so considering the fact that it had not manifested in my body in any way, while he had fallen sick long ago.”

She said despite her anger, she still did not want to report the matter to the police.

“But I told him that he had to take care of the cost of my medication and had to make sure I was comfortable since he was the one who infected me. He then agreed to pay me N2.5m.

But he started abusing me. He would say no man would dare marry a girl with a disease like me. I threatened to report him to the police and he said I should go ahead. He said I would become depressed and commit suicide due to stigma if I did that.

I packed out of his house in anger. Then, one day, I went to his house and found him in bed with my best friend. He did not care. The humiliation was why I decided to finally come to report to the police,” she added.

In Nigeria, non-disclosure of HIV status to a sexual partner and deliberate infection of a partner are criminal offences enshrined in the Sexual Offences Act 2015.

According to Section 24 and 39 of the law, it is a crime to “intentionally, knowingly and willfully” transmit HIV.

The Irish man, who said he had been in Nigeria for more than 40 years, continued to say that the lady infected him instead. “She wanted money from me,” he said.

According to the Police Public Relations Officer, Dolapo Badmos, investigations are ongoing on the case.

“At the moment, we are treating the lady as the victim and the man as the suspect. If our investigation reveals anything to the contrary, we will amend our focus on the case.

But we are also going to look for the friend, whom the complainant said she found naked with the man to determine her status. If we find her and she requires test and treatment, we will ensure she gets that as soon as possible,” she added.

Alleged Sexual Misconduct: Lawmakers to Sue Entwistle, US Govt., Others for $1bn Damages