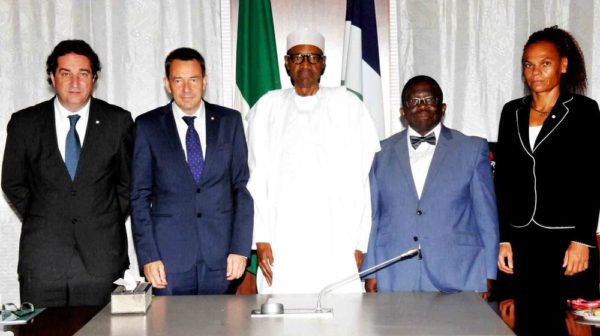 Five days after the release of 21 out of the more than 200 schoolgirls held  captive by Boko Haram, leaders of the International Committee of the Red Cross (ICRC), who brokered the deal, have arrived in Nigeria.

The ICRC officials led by their President, Peter Maurer, on Monday met with President Muhammadu Buhari at the Presidential Villa.

The Red Cross, with the collaboration of the Swiss government, brokered the negotiation between a faction of Boko Haram sect with the Federal government of Nigeria.

The negotiation led to the release of 21 of the abducted schoolgirls.

Government hopes that more of the girls would be released as further negotiation continues.

From Left: Head of mission, International Committee of the Red Cross (ICRC), Mr karl Mattli; ICRC President, Peter Maurer, and President Muhammadu Buhari, after a meeting of Mr President with ICRC delegation at the Presidential Villa in Abuja on Monday (17/10/16) 7743/17/10/2016/Callistus Ewelike/JAU/BJO/NAN

Maurer also disclosed that the ICRC has budgeted 136 million Swiss francs (about $138 million) for humanitarian services in the Lake Chad Region in 2016.

He said that the organisation conducted ‘substantial humanitarian activities’ throughout the region in the year.

He added that the organisation had delivered food to hundreds of thousands of displaced people around the region.

“Over the first half of this year, the organisation delivered food to over 500,000 displaced people. Its overall budget allocated to the region in 2016 amounts to 136 million Swiss francs,” he said.

The president called on the international community to urgently address ‘the vast human tragedy’ around the world, especially in the region.

He called for more sustained and long-term international efforts to address the massive needs in the four countries affected by violence in the Lake Chad area.

Maurer expressed concern at the deplorable condition of no fewer than 30,000 displaced people in Garin Wanzam village in Diffa Region in Niger, which he visited recently.

He said that the displaced persons, who were dependent on humanitarian aids, were still fearful of returning home.

“The village of Garin Wanzam is just one example of the vast human tragedy playing out across the entire Lake Chad region, where some 2.6 million people have been driven from their homes. Over 6 million people are caught up in a daily struggle to put food on the table,” Maurer said.

He called on all parties involved in the regional conflict to protect and respect civilians, detainees and the wounded, based on their obligations under International Humanitarian Law.

God Has Given Me the Power and Strength to Satisfy My 97 Wives, Says Nigerian Islamic Preacher