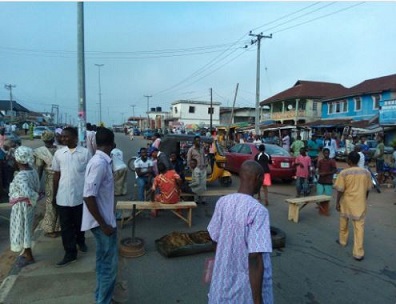 The Independent National Electoral Commission (INEC) on Thursday, cleared Jimoh Ibrahim of the Ali Modu Sheriff-led faction of the Peoples Democratic Party (PDP) as the party’s candidate in the forthcoming gubernatorial election in Ondo State, as against Eyitayo Jegede of the Ahmed Makarfi faction.

Following the announcement, protests erupted in the state, and over the weekend, a Secondary School student of St Joseph College on his way to school lost his life.

Vanguard reports that the student was said to have been hit by the tear gas canister, released by the police in dispersing the rioters in Ondo town, near Ife garage.

In Akure, the state capital, the protesters led by Speaker of the Ondo State House of Assembly, Rt Hon. Jumoke Akindele and Ondo State PDP Chairman, Clement Faboyede marched from Alagbaka through the popular Oba Adesida road and climaxed at the Palace of the Deji of Akure chanting “Eyitayo is Our Choice”. The action paralyzed vehicular, business and commercial activities as all shops in the city were under lock and key in solidarity with Eyitayo Jegede.

The Deji of Akure, Oba Aladetoyinbo Aladelusi, while addressing aggrieved PDP members, appealed to President Muhammadu Buhari to intervene in the Ondo PDP crisis arising from substitution of Eyitayo Jegede with Jimoh Ibrahim as governorship candidate by Independent National Electoral Commission (INEC) according to court orders.

He also enjoined INEC to not be partisan in the discharge of its duties.

“The judiciary should also intervene and make sure that all parties get justice because we don’t want any injustice in Ondo State,” he said.

Faboyede, speaking on behalf of the protesters, also called on President Buhari to intervene, adding that they “don’t want Ondo State to be on fire because our state is peaceful”.

“Some cabals in All Progressive Congress (APC) are using Jimoh Ibrahim against the candidacy of Jegede, Jimoh is not a PDP member but rather a card carrying member of Accord Party,” Faboyede added.

The protesters carried placards with inscriptions such as ‘Return Jegede to us’, Buhari should not interfere in Ondo politics’ and ‘Remember 1983’.

However, the Jimoh Ibrahim faction of the PDP in the state, in a statement by its Director of Media and Publicity, Yemi Akintomide, has said that the state government is responsible for stage managing the protests.

Akintomide said that the move was to “deceive the public that the candidacy of Dr. Jimoh Ibrahim was rejected by the populace.”

“The desperation and pull-it-down at all cost attitude of Governor Mimiko who swore on oath to protect the people and maintain peace and order across the state.

We call on human right groups to rise against this unholy action of ridiculing, disparaging and dis-humanising the dignity and sanity of womanhood, all in the name playing destructive politics that will do nobody any good.

We are appealing to our resourceful market women, darling wives, beautiful sisters and brilliant ladies to shun any act capable of jeopardising their hard earn, long standing family names and core values; and not to dishonour and disrespect their dignified bodies to march half naked in exchange for any amount of money not worth the pride of their womanhood.

We urge Governor Mimiko to toe the line of peace by pursuing the case against Jegede in the appellate courts as demanded by the Constitution.

We also urge them not to rest on their oasis by ensuring nobody, no matter how highly placed, further disrupted the relative peace we have been enjoying in our state.

The PDP, as a peaceful party, abhors violence and destruction of public properties and we view with seriousness this shameful act of brigandage to force the hands of the law to do your wish by fire by force as Mr Mimiko is doing.

The present mayhem is an organised one  being perpetrated by the Ondo State Government and not the of the reaction of the people,” the statement added.