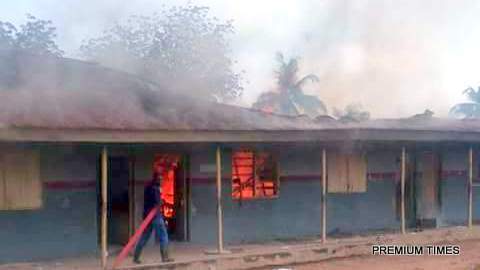 Students of Isale Community High School Oyo state, on Wednesday set some blocks of classrooms ablaze over mass failure in their examinations.

A new policy of the Oyo state government said that students must score 50% and above in Mathematics and English Language in order to be promoted to the next class.

The students’ protests began on Monday with students of Anglican Secondary School attacking their teachers and destroying billboards with pictures of Governor Abiola Ajimobi.

According to PREMIUM TIMES, some teachers said that some students have also threatened to destroy public property in their schools.

Commissioner for Education, Adeniyi Olowofela, declined comment on this report, saying he was not comfortable with a telephone interview.