The Revolution has Begun! Meet the Kings, the Oracle and the Guardians of #3ThronestheConcert | Sunday, October 23rd 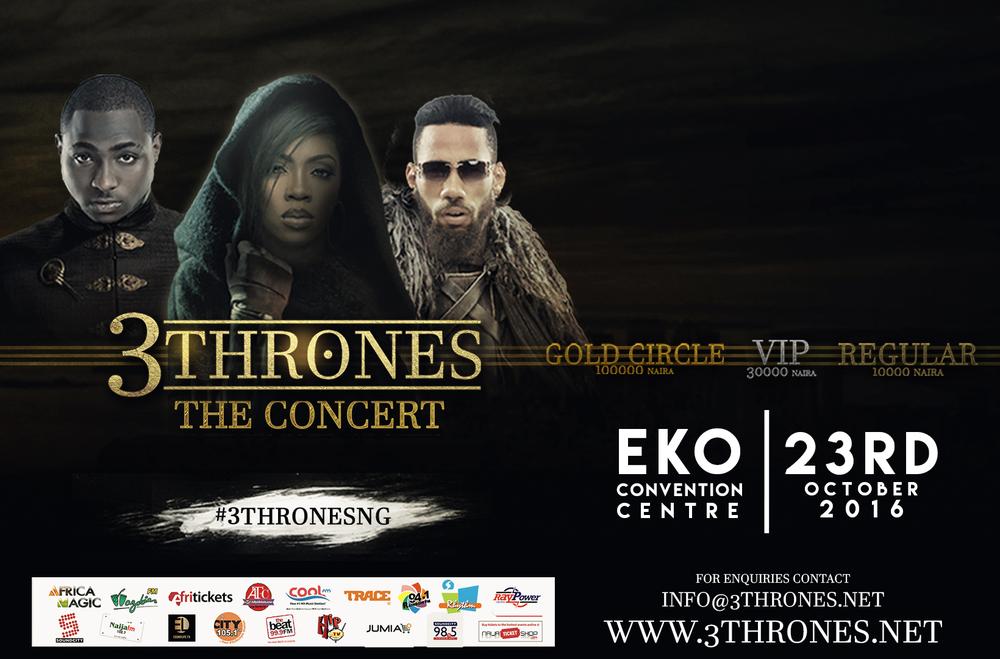 There’s a revolution on social media with the hashtag #3ThronesTheConcert and it’s just a prelude to the main revolution taking place on Sunday at the prestigious Eko Hotels in Lagos Nigeria.

Now meet the Kings, The Oracle and the Guardians to the throne.

– The First King…
He is Nigeria’s top indigenous rapper and the unrivalled King of the East. He is King Phyno and he is the first of 3 headliners for the upcoming & much anticipated 3 Thrones concert.

– The Third King…
Mavin’s first lady Tiwa Savage is the King of Queens and she will take her place to be part of the revolution on the 23rd of October.

– The Oracle…
What is a throne without a King maker or an oracle ? We can’t have a king without the maker of a king. We present to you “Egberipapa 1 of bayelsa” who we all know as Timaya. He is the Oracle of the 3 Kingdoms!

The concert which is said to be one of the biggest this year would witness the best of Tiwa Savage like never seen before alongside rapper, Phyno and singer, Davido.

#3ThronesTheConcert has sparked a spate of conversation among fans across various social media as they express their ardency for a night of fun, intrigue and the best of music with their biggest stars.

It’s an honour to be a part of this – to be a part of a history in the making. This is a first of its kind concert and I’m happy to headline this alongside two of the most respected artistes in Africa; Davido and Phyno. I am about to really deliver a mind-blowing performance as a true Lagosian – my fans should get ready to be thrilled like never before!

Jonathan Butler, Mi Casa and A’rese Excited about Smooth FM’s ‘A Night at the Kazbah’ Concert | See Photos from the Press Conference