Amina Mohammed to be Appointed UN Deputy Sec.-Gen. | "She remains our Minister of Environment" - Presidency

In a tweet on Sunday in Abuja, Garba Shehu, Senior Special Assistant on Media and Publicity to the President assured that Nigerians would be fully informed on any development concerning the matter.

“There is a lot of exuberance on the net concerning a UN job for Mrs Amina Mohammed. She remains our Minister of Environment. If there is anything on this that is released officially, we will let Nigerians know. I am pleased to know that she enjoys so much goodwill,’’ Shehu said.

A tweet by Pamela Falk, a CBS News reporter for the United Nations, said that the world body would soon release a statement confirming the appointment of the Nigerian Minister of Environment. 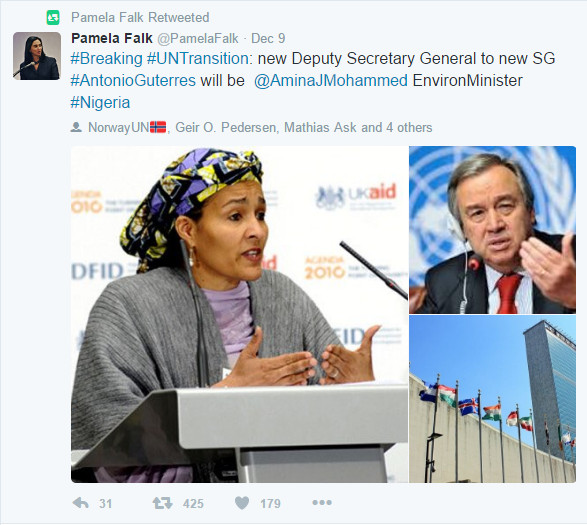 She is expected to be deputy to Antonio Guterres, who will assume office as UN Secretary-General on January 1, 2017.

Mohammed was appointed minister of Environment by President Muhammadu Buhari in November 2015.

She was also recently appointed by President Buhari to serve in the African Union (AU) Reform Steering Committee as the Nigeria’s Representative.

Mohammed, who hails from Gombe State in North-East, had formerly served as adviser to the outgoing UN Secretary-General Ban Ki-Moon.

Suicide Bombing: Adamawa to Review use of Hijab in Crisis-Prone Areas