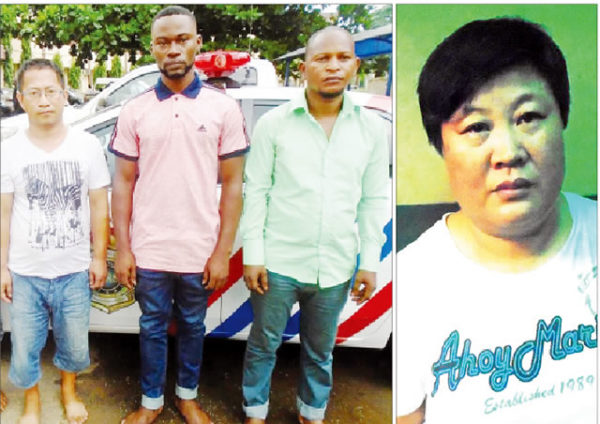 A fake embassy that had issued mainly Trinidad and Tobago visas has been discovered by officers of the Rapid Response Squad (RRS) of the Lagos State Police Command.

The fake embassy, located at Golden Point Hotels and Suites on Duduyemi Street in Ejigbo, Lagos, had defrauded several individuals in the past and issuing fake visas.

According to an RRS source, the Lagos State Commissioner of Police Fatai Owoseni, directed the squad to launch the operation after some of the victims had reported to the police.

“Some RRS policemen had lodged in the hotel for nine days, watching and monitoring the activities of the suspects before their eventual arrest,” the source said.

According to one of the victims, Adekunle Adefuye, one Dorcas Sylver introduced him to the fraudsters.

“She (Dorcas) is a daughter to my brother’s pastor in Abeokuta, Ogun State. I told her about my intention and zeal to travel to the United States. She told me to come to Lagos that she could procure the American visa for me. On getting to Lagos, she took me to the Chinese and I was advised to travel to Trinidad and Tobago. They said I would secure employment with at least $3,000 salary. I paid a total sum of N1.3m in installment for the process, including visa processing and flight fare,” Adefuye said.

“I was arrested with another Nigerian (after getting into Trinidad and Tobago with fake visas). We spent two days with the police. They treated us like criminals trying to enter the country illegally. We were deported on October 22, 2016, and arrived in Nigeria the following day,” he added.

“We left Lagos enroute Lome on October 19th, 2016. From Lome to Sao Paulo in Brazil. From there, we moved to Panama where we boarded another plane to Trinidad and Tobago…. On getting to the country, we were arrested by their security operatives accusing us of entering their country with fake visa and documents…. We were locked up for 48 hours before we were deported on October 22nd, 2016 and arrived Nigeria the following day,” he added.
Adefuye stressed, “When we arrived Nigeria, we didn’t let them know we have been deported. They thought possibly we were lucky to have entered T&T without any challenge. It was one Good Samaritan that came to our rescue in Trinidad and Tobago, who pleaded for us when they threatened to prosecute us before we were sent back to Nigeria.”
On his part, Rasheed Ololade, said that it was same agent, Dorcas Sylver, who persuaded him to go to T&T too, adding that all the money he paid amounted to N1.3M into her account.
“I met Adefuye at their office in Golden Point Hotel and Suites, Ejigbo in Lagos. And we became good friends henceforth…. We were only fortunate to have escaped being jailed in T&T for coming into the country with fake documents and Visas…. They beat hell out of us and starved us for the whole two days before fortune smiled at us. The Police in T and T collected all our belongings including money and threatened to kill us. In fact, they were abusing Nigerians calling us unprinted names…. In fact, we were lucky to have been deported because that country is a junkyard for drug addicts and dealers,” he lamented.
“Some of the Nigerians we met there were barely recognisable, and were high on drugs…. One of them, confided in me that he was struggling to survive by dealing in drugs and that he has resorted to fate, since coming home was difficult,” he added.
Another victim, Friday Owah, who was at their office when they were arrested, said that he just paid N600,000 after being convinced to jettison his Europe trip for Trinindad & Tobago.
According to him, “I was introduced to them by one man, Mr Oscar. I paid directly to Madam Sun’s GT Bank account…. She promised to secure the visa for me within a space of two weeks. By the time the visa was ready, I was unable to part with another N850,000 for flight ticket, which made the T&T visa to get expired…. I went back to see her to help me again for same visa. And she told me to pay another N150, 000. It was after I had made another payment of N150,000 to her account that someone told me they don’t accept stamp visa but only electronic visa is allowed in that country.”
“I went back to explain to her but she denied the information but still insisted that stamp visa is acceptable in that country…. Then, I told her that I was no longer interested in T&T and she should return my money. I came to their office that fateful day to demand for the money when the Rapid Response Squad team came to arrest them,” he added.
Another victim, Lukmon Odeyemi, who said he is a footballer, also paid N125, 000 for Trinidad and Tobago’s en route visa.
“The lady (Sun Xinai) charged me N400, 000 but I was only able to raise N125,000 to her with the hope of balancing her by month end,” he noted.
In his reaction, Liu Hongyag, one of the arrested suspects, said that he only helped his boss to do paper works and documents.
“We operated as separate entity as travel agency under the company’s name, Golden Point Hotel and Tour but our office is located inside the hotel…. Sun Xinai  is my sister,  and she is the director of the travel agency.  I only do paper works and documents for visa procurement…. I don’t know how she secures visa for people. All what I know is that she travels to Abuja and comes back with that stamped visa. I am a phone repairer,” he stressed.

The main suspect, Sun Xinai, said she was unaware that a stamped visa for Trinidad and Tobago was no longer tenable in the country.

The letter, which is a response to a letter from RRS and dated December 7, 2016, read in part:

…the mission can categorically confirm that the individual Sun Xinai, who is claiming to be an agent of this mission, is unknown to us.

Furthermore, this mission does not use the services of an agent in any capacity whatsoever and has never done so in the past either.

With regard to the authenticity of the attached visas, the mission can also categorically confirm that those visas were not issued at this High Commission and are clearly fraudulent.

SP Dolapo Badmos, the Lagos Police PRO said that the Command has launched a manhunt for the agents, adding that the suspects have been transferred to the State Criminal Investigation and Intelligence Department, Yaba, for further investigation.

The state Police Public Relations Officer, SP Dolapo Badmos, said the police had launched a manhunt for other agents of the fake embassy.

“Members of the public should be wary of visa agents. Anyone who wishes to travel out of the country should direct their applications to the embassies,” she added.

Related Topics:Fake Embassy in Lagos
Up Next

2017 Budget will get Nigeria out of Economic Crisis – President Buhari