Prayers were also offered by the leaders and the Aso Villa Chapel congregation for the continued success of President Muhammadu Buhari, and the progress of the entire nation.

Wife of the Vice President, Dolapo Osinbajo and Margaret Shonekan were also in attendance  at the service.

Speaking during the service as he welcomed the leaders, Osinbajo noted that the nation is grateful to God, adding that the Lord has upheld Nigeria even this year which is rounding up.

Later while speaking with reporters at the end of the service, the Vice President added that “the former presidents and vice presidents are here for the thanksgiving service, they’ve been invited specially to come.

“We were also expecting President Jonathan but unfortunately he had to cancel at the last moment. So we are all extremely excited that we are able to bring everyone together to thank God for our nation and to give him thanks for the great future ahead of us.

“We are thanking God, it is a wonderful occasion to thank God and that is what we have done here today.”

Gowon urged all Nigerians to support the present administration’s efforts towards revamping the economy and restoring Nigeria’s dignity in the comity of nations.

He also offered special prayers for the leadership of the nation to overcome the numerous challenges and return Nigeria to the path of prosperity, peace and progress.

In his sermon the chaplain of the Aso Villa Chapel, Pastor Sheyi Malomo emphasized the importance of thanksgiving in every human endeavor. Citing the scriptures, the clergyman said God was expectant of gratitude for his good deeds to man.

According to him, “it is the will of God that whatever situation you are in, you should always give thanks to God because he expects thanksgiving every time.”

The high-point of the occasion was during the thanksgiving proper when the former leaders joined the Vice President and his wife to dance forward towards the altar in praise and adoration of God. Every one in the congregation also followed suit in thanksgiving  and prayers.

A number of cabinet ministers, several top government functionaries and Christian leaders were also in attendance.

After the service, the leaders joined the Vice President at his residence for breakfast. 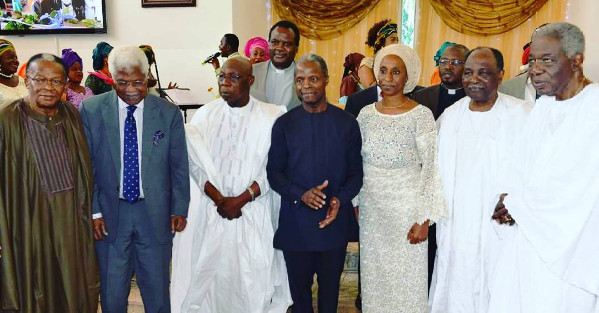