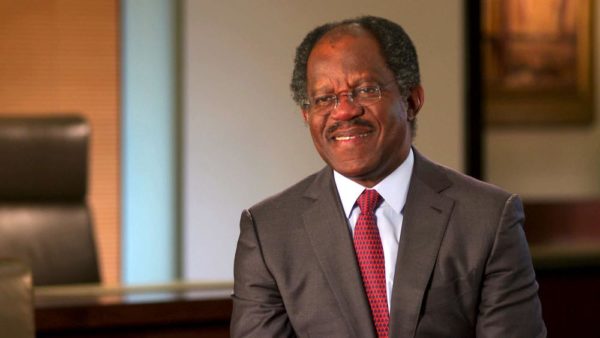 U.S. President-elect Donald Trump has appointed a Nigerian, Adebayo Ogunlesi, the Chairman and Managing Partner, Global Infrastructure Partners, to be part of a group of business leaders to frequently advise him on economic matters.

According to a release by private-equity giant, Blackstone, “The Forum (President’s Strategic and Policy Forum), which is composed of some of America’s most highly respected and successful business leaders, will be called upon to meet with the president frequently to share their specific experience and knowledge as the president implements his plan to bring back jobs and Make America Great Again.”

Ogunlesi, a graduate of Harvard University and the University of Oxford, is the son of Professor Theophilus O. Ogunlesi, the first Nigerian Professor of Medicine.

Apart from his First Class B.A degree in Philosophy, Politics and Economics, Ogunlesi also has an MBA, and a Doctor of Jurisprudence degree.

The Ogun state indigene is also a member of the Board of Directors of Goldman Sachs, a member of the District of Columbia Bar Association, and a former lecturer at Harvard Law School and the Yale School of Organization and Management, where he taught a course on transnational investment projects in emerging countries.

The members of the forum include CEOs from Disney, JPMorgan, General Motors, and BlackRock. Here’s the full list:

“This forum brings together CEOs and business leaders who know what it takes to create jobs and drive economic growth. My administration is committed to drawing on private sector expertise and cutting the government red tape that is holding back our businesses from hiring, innovating, and expanding right here in America,” Trump was quoted as saying.

The group’s first meeting will be in the first week of February and will advise Trump on how to institute policies to encourage job growth and improve productivity.

The Fashion Bloggers’ Guide to Christmas Shopping in London