President Buhari Optmistic that Recession will end in 2017 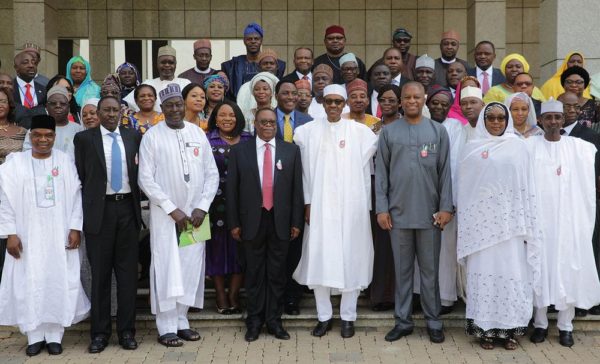 President Muhammadu Buhari in a group photographs with Ambassadors-designate and other Government officials at the opening of Induction Course for Newly Appointed Career Ambassadors, at the Nigeria Intelligence Agencys headquarters in Abuja on Monday (19/12/16).
9218/19/12/2016/Ewelike Callistus/EO/BJO/NAN

President Muhammadu Buhari has expressed optimism that the current economic recession would come to an end in 2017.

President Buhari gave the assurance on Monday in Abuja while declaring open an induction course organised by the Ministry of Foreign Affairs for Nigerian Career Ambassadors-designate.

The News Agency of Nigeria (NAN) reports that the Ambassadors-designate were recently cleared by the Senate.

President Buhari expressed the hope that the external factors that partly contributed to push the economy into recession would ebb in 2017.

“We are optimistic that the external factors that partly contributed to push our economy into recession will ebb in 2017. Until then, I regret that the resources available to fund our missions abroad will not be as robust as we would like. We are working hard to turn around our national economy by effectively reforming our macroeconomic environment through measures, some of which were outlined in my budget speech to the National Assembly last week,’’ he said.

According to him, the prevailing economic circumstances have led to a restructuring of Nigerian missions abroad.

He therefore urged the Ambassadors-designate to make judicious use of the resources put at the disposal of their respective missions.

“We are all making great sacrifices at home, we also expect you to similarly make judicious use of the resources put at the disposal of your missions. As Heads of missions, you will be held accountable for the utilisation of all resources under your control. These are lean times, and all of us are expected to do more with less,” Buhari said.

He specifically charged the Ambassador-designates to change the narrative of Nigeria outside the country by playing up the positive values and outstanding contributions of Nigerians in the global arena.

“I want to emphasise your duty to change the narrative of Nigeria as seen by the outside world. For far too long, we have allowed Nigeria to be defined by others, always emphasising our negatives. To the average foreigner, Nigeria evokes 419, terrorism, militancy, communal and religious clashes, insecurity, corruption and all our other faults,” he said.

The President said it was duty bound on their part to correct this narrative by taking the “initiative to define and portray our country for what it truly is.

“We are a nation of 180 million vibrant, enterprising, hardworking, hospitable and peaceful people. We are a remarkable nation that has succeeded in harnessing our multiple diversities as strengths such that we are the leading country on the continent.’’

He urged them to mobilise, sensitise and motivate all their staff so that together they could engage with their host governments, the private sector and other segments of the society to explain that “Nigeria is much more than the negative image portrayed to them.”

President Buhari also enjoined them to leverage on the achievements of Nigerians within the country and in Diaspora.

“Think of people like Nobel Laureate, Wole Soyinka; Chinedu Echeruo who founded Hotspot application which he sold to Apple for over a billion dollars; think of Bayo Ogunlesi, who runs a billion-dollar Infrastructure Fund and is now Adviser to US President-elect; and Jelani Aliyu, an accomplished car designer at General Motors. Indeed, these and other hardworking Nigerian professionals in the Diaspora have never forgotten their roots and have been making significant contributions to their communities back home, and even to our economy through their huge remittances,” Buhari said.

He urged them to sustain the work ethic characterised by the love of country, professionalism, excellence, integrity and honour associated with the “Nigerian diplomatic tradition established in 1957.’’

President Buhari also charged the Ambassadors-designate to stress Nigeria’s commitment to international peace and security through contributions “to nearly every UN peacekeeping initiative since 1960 when we achieved our independence.

“In addition, we are the stabilisers and shock absorbers of West Africa having helped to contain potentially de-stabilising developments in the sub-region.”

According to him, as Nigerian Ambassadors, they must set the standard of putting Nigeria first in all your actions, adding that they must show leadership, fairness and justice to all.

He said that discipline, probity, accountability and zero tolerance for corruption must be their watchwords.

“You are expected to project the best image and traditions of our country in your conduct and all you do,” he said.

Which of these Beauties will be Crowned as Miss Nigeria? 40th Anniversary of Historic Pageant takes place Tonight