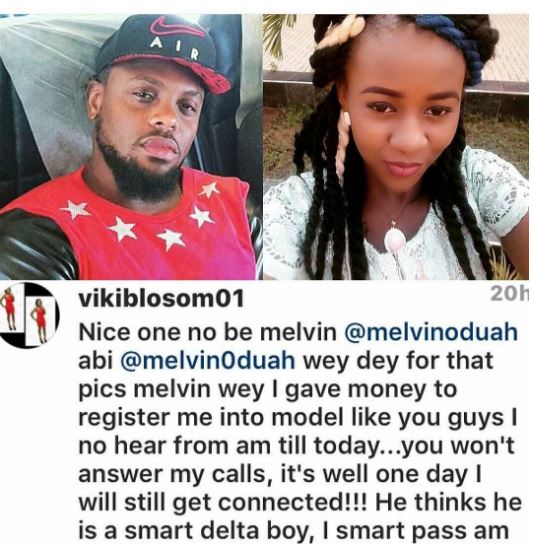 Yesterday an Instagram user went online to state that she had been scammed by former BBA housemate turned actor, Melvin Oduah.

According to her, she gave him money to register her as a model and he never came through.

Taking to his page to deny the allegations, Melvin stated:

At this point in time, all i will do is just laff my ass out. LMAO!!!! Like for real guys, AM DONE!
I have done everything humanly possible to warn, alert and remind u guys about situations like dis.
My IG handle is @melvin0duah Its a zero and not an O. And d reason it is so is because impersonators used my real name to open an account on IG before i joined IG. So i was forced to go with the option of using a zero as the O in my surname.

I have announced, reported and done everything possible to let the public know about this but people (especially girls) keep falling for these impersonators.

I have never and will never ask anybody for money or airtime or any stupid petty crap via IG.

Anybody who feels he or she can spoil my name with cheap sh*ts like dis is just wasting his or her time. Baba God pass all of una. Am too busy hustling and putting things in place mehn. I dont have time for stupid illegal cash. Its not my thing at all.

At this point, i’ll let the smart ones keep being smart and let the stupid ones to keep being stupid. Keep paying money and buying airtime for all d fake MELVIN ODUAHS out dere. I wont even b surprised if a girl reports tomorrow dat a fake Melvin Oduah lured her into his bed wearing a mask and told her dat its his sanctuary and dat he cant sleep with any girl without wearing a mask. Lol

@vikiblosom01 Whoever u are, Whatever happened to u is good for u. More grease to ur elbows. Pls keep it up! @instablog9ja Nutin do u jare. Keep doing ur thing. Nice one!

Am done here guys. A word is enough for the wise. #PeaceOut

Related Topics:Melvin Oduah
Up Next

BN Weddings – Video: “The very first day you called me your wife” Jessica & Hilary were Meant to Be and it Shows! Check out their Fun Wedding