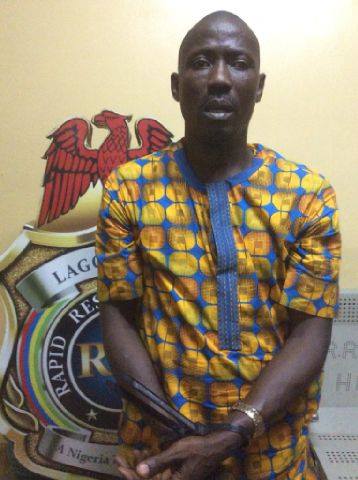 Segun Akintola, a suspected leader of a syndicate that specializes in defrauding innocent citizens has been arrested by officers of the Rapid Response Squad (RRS) of the Lagos State Police Command.

The suspect, popularly known as Okadigbo, was apprehended by the Decoy Team of the squad at his shrine in the Ijora area of the state, over his involvement in a fraudulent operation perpetrated by the 4-man gang under him.

The fraud, which was perpetrated in Ikorodu about a year ago was supervised by an accomplice, Christian Odokor, 43. The syndicate had duped a lady known as Joy (not real name) while in transit from Ikorodu towards Mile 12, where the victim had planned to buy some goods.

Preliminary investigation conducted by the Decoy Team of RRS revealed that Okadigbo is the arrow head of several syndicates of fraudsters operating in different parts of Lagos State and some parts of Ogun State. 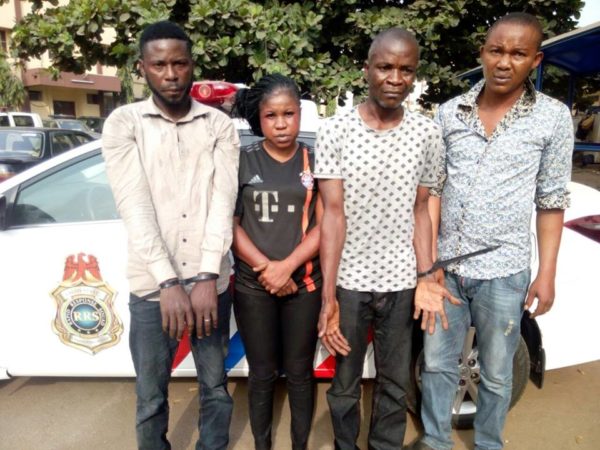 The members of his syndicate, it was learnt, report to his shrine regularly where their nefarious activities were always planned.

Until his arrest over the weekend, four of his accomplices earlier arrested by the operatives of RRS have given him out as their ring-leader.

The operatives were reported to have been on the lookout for him, but he has remained evasive throughout 2016.

Okadigbo, while confessing to being a fraudster who operated by pretending to be a herb seller in parts of the metropolis, denied being the leader of the syndicate traced to him.

According to him, “it is true they used my shrine and office. They bring their victims there but everybody operated on their own. They all assemble there but everybody managed their group…. Although, the fake dollar they use is mine but I don’t know anything about this job for which they have been arrested.”

“I operated by selling herbs, but I market quick money rituals to people as well as herbs for people looking for children. I do spiritual bath for clients and that is how I defraud people and make my money,” he disclosed.

Christain Odokor, the leader of the Ikorodu fraudsters, in his confessional statement said: “We robbed her (Joy) about a year ago…. We took all she had from her including the sum of N300,000 and recharge cards of all networks worth N120,000. Okadigbo is our master whom most of us report to at least thrice in a week.”

“All of us, about nine groups that I know report to him. We operated in different parts of the metropolis…. He is so powerful and fiery that no police dare to arrest him. Now, I was shocked seeing him here with us in your custody,” he added.

Another member of the team, Toyin Idebi, 25, said that greed made her join the gang two years ago.

“I was a stylist and doing well before I joined them. When I saw how they were spending money on ladies like me, then I moved closer to them to know their secret…. Initially, they were reluctant to tell me their job as they just told me they were into export and import business. I pressed on till one of them asked me if I can keep a secret. He opened up and I joined them.”

“My main job was to act as someone who was carrying foreign currencies who didn’t know her destination. Those currencies were fake (and) I didn’t how Okadigbo got them.” 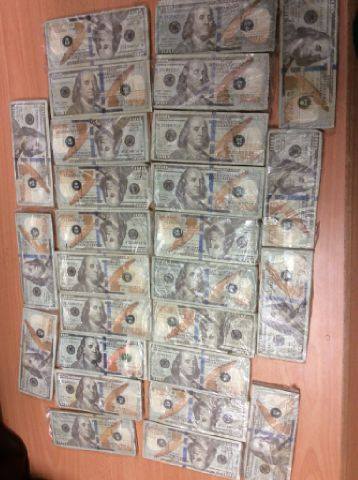 While recounting her ordeal, the victim said:

It was on Wednesday afternoon, January 13th 2016 on my way to market. The lady amongst them flagged me down by calling Sabo passengers from Ikorodu garage.… When I saw the lady sitting and calling for prospective passengers I never thought otherwise. Immediately I hopped in and sat down beside her. I saw three other men inside the car.

Suddenly as we were progressing, the lady begged me to help her with my phone to make phone calls giving excuse that she had no call card on her.

As a lady, I handed over my phone to her and she made two separate calls with my phone.

As we moved a bit (further), the driver detoured the journey to unknown destination…. I queried the driver where he was taken me to, he refused to respond.

Suddenly, they pulled over in the middle of the way, the driver pointed gun at me and the lady showed me knife to cooperate.

They ransacked my bag and removed the whole money with the recharge cards, and they sped off.

Confirming the incident, the State’s Police Public Relations Officer, SP Dolapo Badmus, said that the Command will not rest on its oars until it rids the state of bad elements and reduce the criminal activities in the state to the bearest minimum.

She added that the kingpin and his gang members would be charged to court upon completion of investigation.

The suspects have been transferred to the State Criminal Investigation Department (SCID) for further investigation.