Yay! BellaNaijarians, we have been loving all your entries so far.
We go love o!

The #UnionBank100BellaNaija Valentine Season Giveaway from Union Bank and BellaNaija kicked off two days ago as we are giving TEN people N100,000 each (one person per day) for Ten Days.

Want to be a part of it? You can still put in your entry for Day Three today (click here for more information) and be on the lookout for the next seven days.

Day 2 was all about love and food and we got really interesting entries across Twitter, Facebook, Instagram and in the BellaNaija comment section. It was tough to select one winner but with a team of judges, we have selected ONE winner for Day Two.

See the winning entry from Chayil (In the comment section on the site) below.

Stanley was my beautiful friend and colleague at work. He was one person who I could tell this, that and what! He always knew what was happening to me per time and he was always there for me when I needed him.
On this fateful February afternoon, Stanley called me that he was not feeling too well and couldn’t make it to the office. As the bestfriend that I was, I quickly thought to go pay him a visit, while I proceeded to the kitchen to make him his favorite dish of Semovita, dangerously-peppered èfó rírò and assorted meats. I had some ground pepper puree in my kitchen, so that wasn’t gonna pose a problem. I did my abracadabra and in less than 90 minutes, I was at the bestie’s.
He was with a male friend when I got in. Stanley didn’t look so good. He looked pale from head to toe and looked like he needed some palatable meal. Chayil to the rescue! I quickly went to his kitchen and served him the food I had made and brought. I sat beside him to watch my delicacy work wonders, as this was not gonna be the first of its kind.
The look on Stanley’s face after the first morsel of my Semo and dangerously-peppered vegetable delicacy was like a million volts of electricity ran through his body in a millisecond. He rushed to the bathroom to throw up. Stanley must be really down with typhoid fever, I thought. “We need to rush him to the hospital”, I exclaimed as I rushed after him. Coming back to the dining table, Stanley’s friend (Wole) had just moved to help himself with the food his friend had no appetite for. He looked like a child being forced to eat. He asked me to join him. Not wanting to seem impolite, I picked a fork and digged into the plate vegetables. I’d not completely put it in my mouth when my legs carried me into the bathroom to throw my intestines up. Only then did I realise, that the pepper puree I used in making the vegetables had gone sour as there had been power outage all through the night at home. I had never felt so embarrassed! I looked at Wole with unbelievable eyes. How did he manage to eat so much of the food? My melanin must have given way for a blush as Wole went to the nearest eatery and got Stanley some food and some antimalarial. When, Stanley eventually slept, Wole offered to give me a ride home. I declined, but he insisted. During the drive home, I could hear a pin drop and the sound of my heartbeat was loud enough music. As I got down from the car, Wole’s voice trailed me. “Can I get treated to some more concoction anytime soon?”. I replied “Goodnight” under my breath.
A few days later, Wole called me and said he’d like to get even by treating me to his own concoction. I don’t know why I accepted his invitation. I went to his house and had the best meal I had tasted in a looooong time. I couldn’t believe he made it all by himself. We became friends and he never stopped teasing me about the concoction I had subjected him to.
On our wedding day last year, exactly two years after the concoction incident, the best man Stanley, while giving the best man’s speech went on to let the world in on how Wole, the groom had eaten the concoction with the ‘love potion’ originally meant for him (i.e. Stanley).
It has been a rollercoaster of love since then, and of course we have no regrets. I guess love still happens with food – sweet, tasteless or outright bitter!
#UnionBank100BellaNaija 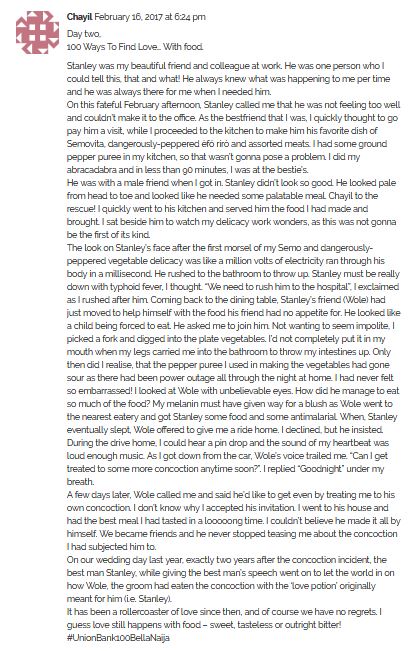 Congratulations and we’ll be in touch!
If you didn’t win, do not be discouraged, keep your entries coming!

Freeze & Kiibati Bankole in Online Battle over Payment for an Event