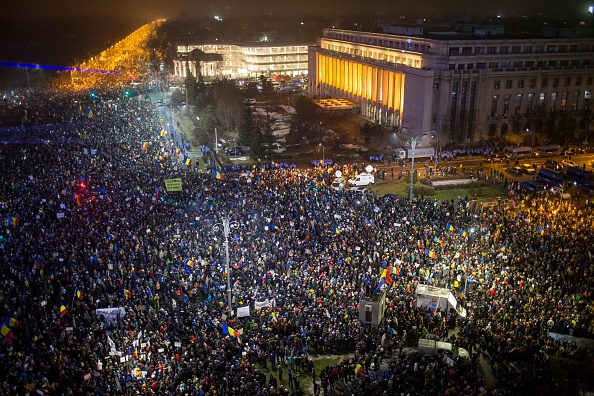 Tens of thousands of Romanians protest against the government in the largest protest movement the country has seen since 1989 in Bucharest, Romania.

Romania’s Justice Minister Florin Iordache said he would publish the details of a new bill on the criminal code later on Monday, a day after the government scrapped an earlier decree following mass protests and international criticism.

Hundreds of thousands of Romanians had protested in capital and other cities against the decree that would have effectively shielded some officials from prosecution on corruption charges.

According to the new decree, a corrupt official will go to jail only if the funds involved exceed $47,500.

The decree, passed by cabinet, went into effect immediately.

The rule also allows for corrupt officials to escape punishment completely in some instances, for example if the crime occurs between members of the same family.

An estimated 500,000 persons came out to protest, in the biggest anti-corruption demonstration since the fall of communism in Romania in 1989.

The decree, which decriminalises a number of graft offences, was hastily adopted by the cabinet late on Tuesday evening, barely a month since the Social Democrat-led government of Prime Minister Sorin Grindeanu took power.

A cabinet minister resigned on Thursday over the government’s decree.

Florin Jianu, Romania’s minister of business, trade and entrepreneurship, announced on Facebook that he was resigning.

“It is the ethical to do,” he said, “not for my professional honesty, my conscience is clean on that front, but for my child.

“Am I going to tell him his father was a coward and supported actions he does not believe in, or that he chose to walk away from a story that isn’t his?”

Six western states including Germany and the United States had also criticised the government.

#IStandWithNigeria Protest Kicks off in Lagos, Ibadan, and Abuja | Photos and Videos