Cisi Eze: Who Will Marry You? 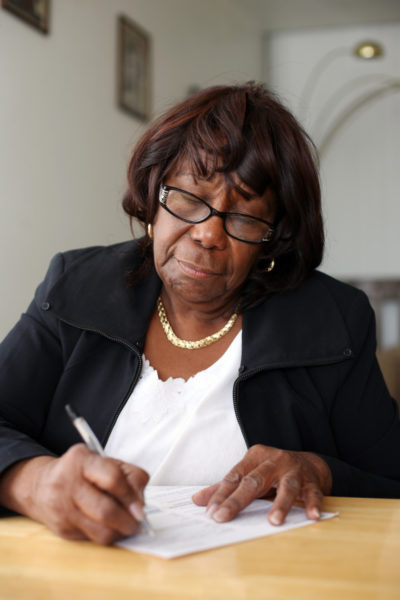 There is that weird relative that could send this kind of letter:

How are you? I know you are doing great and I am happy for you. You have a good job. You live in a beautiful house in Lagos. You have bought a big car. I even heard you bought a plot of land. You built a mansion for your parents in the village and gave them two cars. They say you have money to throw around at functions. All these things are good, but what bothers me is that you have become the man your parents wanted you to marry. What man would want to marry another man? You are as strong as a man. You are as rich as a man. Who will marry you? Gwa’m, Ada. Who will marry you?

What man would want a woman that rubs shoulder with him and competes with him? Don’t you know that to be a wife, you have to submit to your husband? Haven’t you read the Bible verse that says wives must submit to their husbands? Didn’t you hear the Man-of-God that said marriage is not a partnership? He said husband means master.

Where is your femininity? Do you not you know a man wants a woman he can take care of? What makes you feminine? I even asked my son, Okey, to read something from the internet. He read, “Femininity is a set of attributes, behaviours, and roles generally associated with girls and women. Femininity is socially constructed (…)” The grammar was too much and I asked him to read to me the traits of being feminine.

When I wasn’t getting all the plenty grammar, I asked him to read another part, and he read, “Betty Friedan wrote that the key to women’s subjugation lay in the social construction of femininity as childlike, passive and dependent…” More oyibo.

Don’t you know you are meant to be submissive? Money is power and power intoxicates. You will never see your husband as your master. Men are the head. That is why Onye Ocha’s religion says men were created before women.

Now that you are as strong as a man, will you marry a woman so she can be your wife? Will you two be like the goddesses Ogugu and Wiyeke? You children don’t know much of our barbaric culture. I am happy Onye Ocha’s religion stopped it. Even when you told me Onye Ocha’s god committed barbaric acts in the Old Testament, it does not matter because old things have passed away.

“According to story, Ogugu, the chief female deity in Ohambele and neighbouring towns in the Owerri District, was popular for giving children to her female worshippers. In another town, Akwete, resided another female deity, Wiyeke. At one point, for undisclosed reasons, Wiyeke courted Ogugu as her wife. Ogugu agreed to the marriage on the condition that Wiyeke would come and live with her as her wife at Ohambele. Wiyeke accepted the condition and thus joined Ogugu as one of the female deities of Ohambele, assuming the status of Ogugu’s husband. This explains why women could get married to women in Igboland.”

But you can’t marry a woman! It is a sin! Marriage is important for a woman. Don’t you know that a woman’s crowning glory is a man? You need a man before we agree you are a woman. You must get married.

I sigh for you in pity. What is all the money in the world without a child? Haven’t you heard the name “Nwakaego”? A child is more important than money. I know there are women that have children out of wedlock. May that not be your portion! How can you go around town as a single mother? What do you think people would say about you? They will call you a prostitute. They will say all sort of things.

My dear niece, I am not saying money is bad. I am not saying you should not have something on your own. I am only saying you should not be richer than your husband. I am afraid you have become the man we wanted you to marry. No man wants to marry another man. Please, be more feminine- be more of a woman. No man wants a woman that competes with him. Nne, biko, tone down yourself.

That said, please, you can send me some money for my arthritis drug. The price has gone up. Your cousins, Uju and Nkechi, have abandoned me since they went to their husband’s house. They have refused to send me small change. Their excuse is that their husbands didn’t let them get a job. Can’t they start a small shop in front of their houses? All Okey does is to press his phone. At least, he helps with some money. But you, Ada, have been more of a daughter to me. Were it not for you, I would have been a withering woman. I love you so much. I want you to be happy. A man will make you happy, I know because that is how it should be. That is how it has always been for our people. We met it like this, we can’t change it. My dear, don’t forget my words. Tone down so that you will find a man to marry you.

P.S. What we call femininity and masculinity are mostly social constructs.

Sex and gender are different things.

Having a penis or vagina does not give you certain abilities; those abilities are acquired.

Abisola Owokoniran: Addicted to the ‘Gram