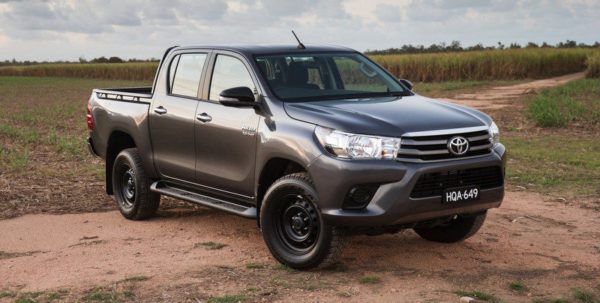 One of the Impounded Vehicles. Photo Credit: NAN PHOTO

The Compliance Task Force set up by retired Colonel Hameed Ali, the Comptroller-General of the Nigerian Customs Service (NCS) on Monday impounded 223 vehicles, 13 of which belong to a senator in Kano state.

The Task Force Zonal Commander, Bala Dole, made this known in an interview with the News Agency of Nigeria (NAN) in Kano on Monday.

He said the vehicles, belonging to the unidentified senator were; 12 new Toyota Hilux and one Land Cruiser Jeep.

Dole, who declined to name the said Senator, said the 13 vehicles were trailed from Maigatari in Jigawa, following an intelligence report, indicating they were smuggled into Nigeria via land borders.

“Based on the intelligence report, the vehicles were 30 in number but we were able to trail 13 of them 12 of which were hidden in the senator’s compound. We sealed the house and retrieved the vehicles and they are now in our custody,” Dole said.

The identity of the senator will remain a guessing game for now.

The task force also said that it seized other items, including foodstuff worth N269.5 million in Kano and Jigawa states within eight months.

“The total value of the seizure made by the task force since it was established in July 2016, excluding the 13 Senator’s vehicles, is N269.5 million. We are yet to determine the cost of the 13 vehicles belonging to the Senator.”