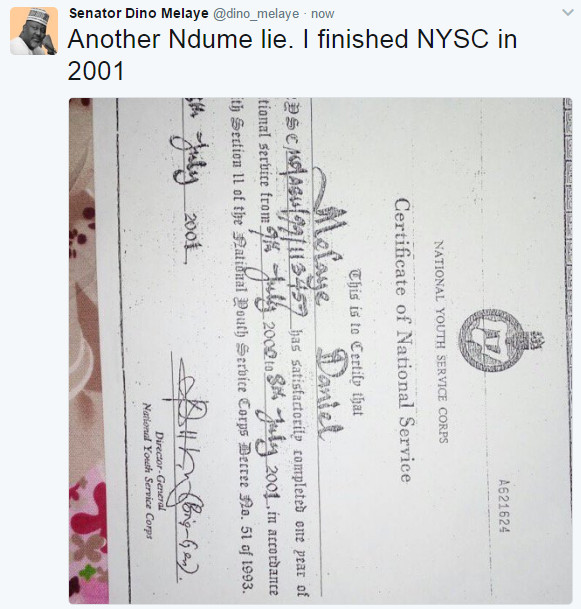 As the controversy surrounding his graduation from Ahmadu Bello University (ABU) continues to rise, Senator Dino Melaye (APC-Kogi) has shared a photo of his National Youth Service Corps (NYSC) discharge certificate which showed that he completed the mandatory service in 2001.

This is probably in reaction to social media comments after ABU Vice Chancellor, Professor Ibrahim Garba said that he graduated in 2000.

Dino had earlier posted a photo of him and his colleagues during NYSC with the caption: “ABU 99 set at NYSC camp in KD. Me in blue short”.

Social media commenters had questioned why he will undergo NYSC in 1999, meanwhile he graduated in 2000.

He shared the photo to show that he completed the service in 2001 and not 1999 as insinuated.

The senator captioned the photo: “Another Ndume lie. I finished NYSC in 2001”.

Ali Ndume (APC-Borno) is the ousted former Senate leader who had raised a point of order that Melaye and Senate President Bukola Saraki be investigated by the senate’s ethics committee concerning Melaye’s certificate scandal and the alleged importation of a Bulletproof Range Rover SUV by Saraki.

See the photo of the certificate below: 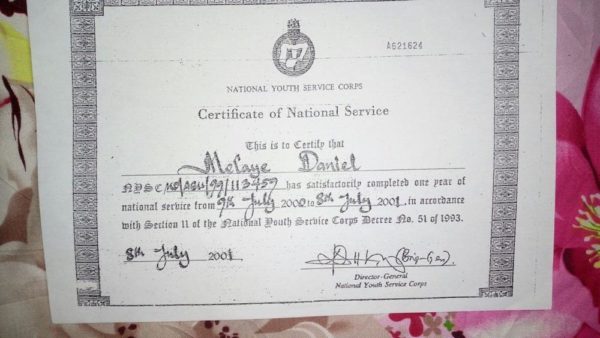