Ese Walter’s “Naked: A journey to Self”: Life Before and After the COZA Scandal #LiterallyWhatsHot

When the story of her affair with COZA’s Pastor Fatoyinbo broke years ago, my first thought was: m’kay, people are going to hit this girl hard! Unfortunately, it was a mega-sonic impact. She had to disappear for a while because of the hate spewing from “Christians” and others alike. I never followed up, but I was interested in how she handled her life after the backlash. I suspected she’d discuss that in this book, and she did.

Ese starts with her childhood, growing up and constantly wondering if she was good enough. Like many young women a major problem was with packaging herself to society’s specifications. She says: “People-pleasing was my way of trying to stay on everybody’s good side.”  It took her a long time to realize she didn’t owe anyone anything. Culture is good, society is fab, but you owe it to yourself not to drown in the sea of standards.

We get whole chapters on sex, money, and love. These are the three major things that drive the world, so it was appropriate (I think) that she addressed them in discussing her life. She also explores the events that led to her turning to Christianity and then some. There was nothing specific about how the affair progressed between her and the pastor. Nothing to rile people up, and I think that was intentional. Somewhere deep inside, I think she was scared that doing that would bring the demons back. She wanted to share her “story”, but didn’t want to open old wounds.

A most important part of this book is the insight on constantly questioning her faith even though she was devoted in church activities. I actually know a lot of people like this, people who are the top performers in church but still question God and the reason for doing what they do. Many people have these questions but are afraid of being labeled “sinners” or atheist wannabes . Apparently, Ese choose to toe her own path and she details how she steps into a new set of beliefs.

Discussing her marriage, childbirth, and emotions that come with those were powerful topics for me. Admitting to near failure in those parts and yet picking herself up is a marker that she is finally starting to find herself.

To me, her writing this was more about self-healing than anything; it’s Ese saying she’s finally come to terms with what happened. One of the many quotes which Ese starts each chapter with has Oprah saying: “Forgiveness is giving up the hope that the past could have different.” To that I say an Amen. I wish people would realize this often ignored truth. 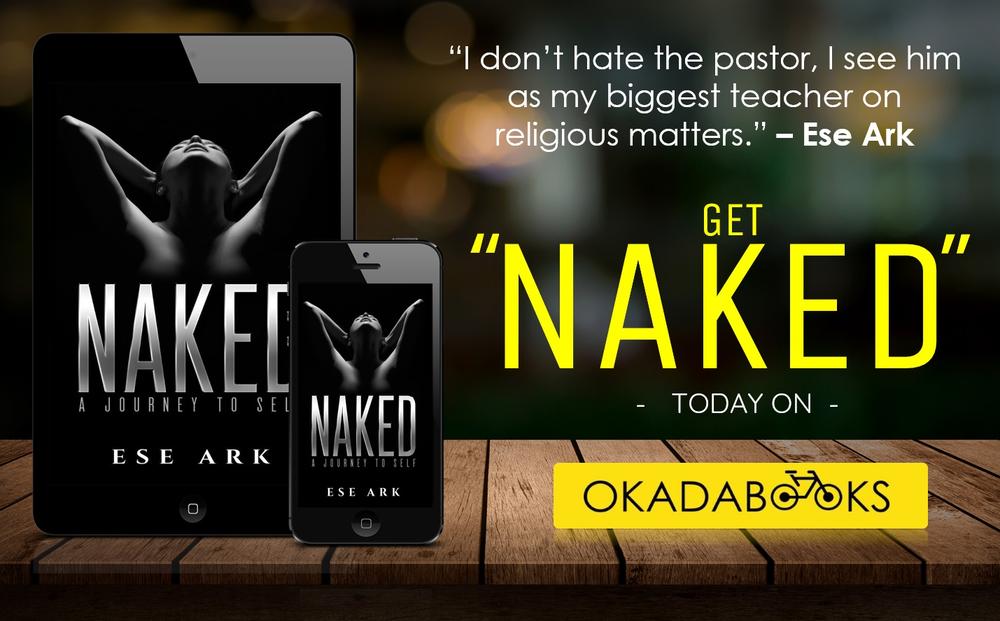 In truth, I feel Ese still has a lot of soul searching to do. Deep issues like these aren’t just resolved in three, four years. I really like that she’s channeling her energy into running Femina Speaks, a platform for helping young ladies confused about “life, love, purpose, and what it all means”.

Society hates to admit it, but we are a sum of our past. Hurrah for thinking of a new life and dreams, but if you don’t make peace with your past, there’s no future. She’s doing that and that’s what matters to me.

If you’re reading this book to find details about the Fatonyinbo issue, don’t. The book is more “inspirational” and thought stirring than the exposé we all expected. Through intense therapy, soul searching, and forgiveness, Ese has pulled off the garments of shame that held her back for so long.

She opens herself to the world in her debut powerful memoir “Naked: A Journey to Self” now available on OkadaBooks! Sign-up with this link http://bit.ly/FreeOkadaCredit and get N150 free credit. You should get a copy if you’d like to see inside her world, and understand her perspective on life. Remember, no lesson is invaluable. You could be in her shoes tomorrow.