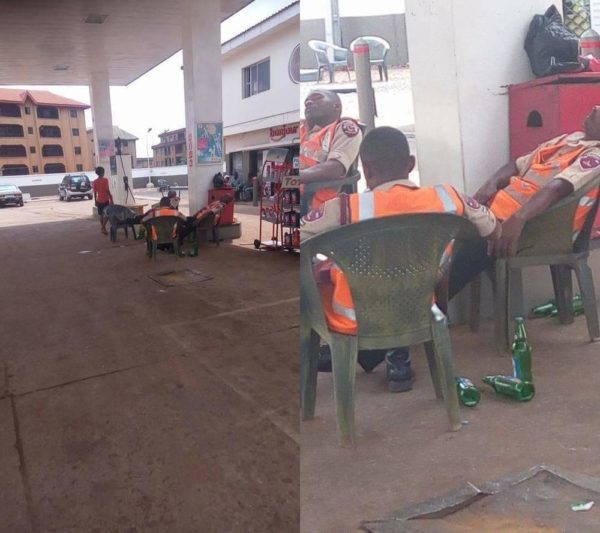 The Federal Road Safety Corps (FRSC) has confirmed that the three suspected drunken men in uniform whose photographs are circulating on social media are its officials.

The spokesman of the Corps, Bisi Kazeem, in a statement on Monday, said that the officials were of the Nteje Unit Command in Anambra.

Kazeem said the men had been recalled to their Sector Command for “administrative and disciplinary action”.

The photograph was posted on Facebook by one Ndubuisi Sunday.

It showed the men apparently sleeping on plastic chairs with empty bottles of beer on the floor beside them.

This is coming barely two weeks after pictures also hit the Internet of the Rivers Sector Commander, Ayodele Kumapayi, cutting the hair of some female personnel as punishment for carrying long hairdo.

Kumapayi has since been recalled to the agency’s headquarters in Abuja and is currently under investigation.

“Our attention has been drawn to the recent pictures of the alleged drunken state of personnel of the FRSC during working hours and in uniform, making rounds on blogs, online and conventional media.

The FRSC wishes to assure Nigerians that its remains an organisation that does not condone indiscipline on the part of its workforce, nor coverS up for their inadequacies, whether officers or other ranks (marshals).

The alleged marshals whose photographs were taken at Tarzan Junction, close to Onitsha have been identified as operatives of the Corps from Nteje Unit Command under the Anambra State Sector Command.

The marshals were deployed for traffic control and monitoring for the Easter Special patrol at Tarzan junction close to Onitsha.

They have been recalled for administrative and disciplinary action at Anambra State Sector Command, Awka, being the Command that supervises the affairs of the Nteje Unit where they served on the directive of the Corps Marshal, Dr Boboye Oyeyemi, who abhors indiscipline in all its ramifications,” Kazeem said.

The spokesman said Nigerians will be notified of the disciplinary action taken against the personnel as soon as the administrative panel concludes its assignment.