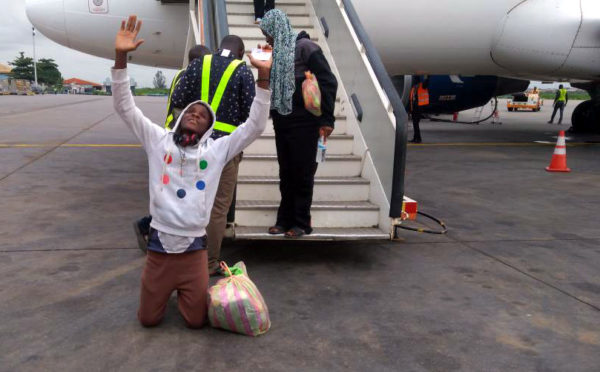 One of the 164 Nigerians who voluntarily returned from Libya thanking God after the aircraft landed at the Murtala Muhammed International Airport in Ikeja, Lagos State on Thursday 25/5/2017/ Solo Omos/HB/BJO/NAN

No fewer than 165 Nigerians voluntarily returned from Libya on Thursday aboard a chartered Nouvelair aircraft with registration number TS-INA.

The News Agency of Nigeria (NAN) reports that the aircraft landed at 5.01 p.m at the Murtala Muhammed International Airport, Lagos.

The returnees were made up of 97 males, 54 females, 11 children and three infants.

They were brought back by the International Organisation for Migration (IOM) and the Nigerian Embassy in Libya.

The returnees were received at the Hajj Camp area of the airport by officers of the Nigerian Immigration Service (NIS), the National Agency for the Protection of Trafficking in Persons (NAPTIP) and the Police.

Also on ground to receive them were officials of the National Emergency Management Agency (NEMA).

Addressing newsmen, Mustapha Maihaja, the Director-General of NEMA, said the agency in collaboration with IOM was working to ensure that Nigerians stranded in Libya were brought back home.

“We are here to ensure that they are well received. We feed and give them money to enable them get back to their respective destinations,” Maihaja said.

The director-general, represented by Suleiman Yakubu, the Zonal Coordinator, South West, NEMA, however advised Nigerian youths to develop the mentality of staying back home and helping to build the country.

“Those of them who have gone and come back will testify that it is better here, especially now that we are in the era of the change mantra. A lot of initiatives have been put in place by the present administration to ensure that life is better in Nigeria,’’ he said.

According to him, a similar scheme which is being put in place by the IOM will take off in July, as the organisation has already informed other stakeholders about the development.

Two of the returnees who simply gave their names as Owen and Ehis, told NAN that they spent more than seven months in detention in Libya after they were sold into slavery by militias.

They thanked the Federal Government for facilitating their return to Nigeria and pleaded with the government to assist them in getting their lives back.

NAN reports that the returnees who were given a stipend of N17,100 each were later transported to the Jibowu Park to find their way to their respective destinations.

NAN recalls that two batches of 258 Nigerians voluntarily returned from the North African country on May 11 and May 16 respectively.

How Gunmen Kidnapped 6 Students in Lagos Days after Writing School

#Biafra50: “There is enough cake for each of us” – Olusegun Obasanjo