Emmanuel Macron has promised to restore France‘s global standing, as he was officially inaugurated as the country’s youngest president at the age of 39.

“My mandate will give the French back the confidence to believe in themselves,” President Macron said at the elaborate Élysée Palace ceremony. He vowed to see the EU “reformed and relaunched” during his time in office. He takes over from François Hollande, whose five-year term was plagued by high unemployment figures.

Mr Macron was proclaimed France’s new president a week after his resounding victory over the National Front‘s Marine le Pen, with 66% of the votes in the run-off poll. The former investment banker, who had never contested an election before and only formed his centrist political movement a year ago, has vowed to shake up the country’s political order and reinvigorate its economy.

Tight security was in place across Paris for the ceremony at the president’s official residence, with hundreds of extra police on patrol. France has been under a state of emergency since terror attacks in 2015 and a large section of the city centre was closed to traffic all morning.

During his inaugural address on Sunday, President Macron pledged to restore the confidence of the French people in their country’s future.

The division and fractures in our society must be overcome. The world and Europe need more than ever France, and a strong France, which speaks out loudly for freedom and solidarity.

He further promised to convince the people that “the power of France is not declining – that we are on the brink of a great renaissance”. He was presented with a necklace once worn by Napoleon I, as a symbol of his position as Grand Master of the Legion of Honour (a title usually given to the leader of France). 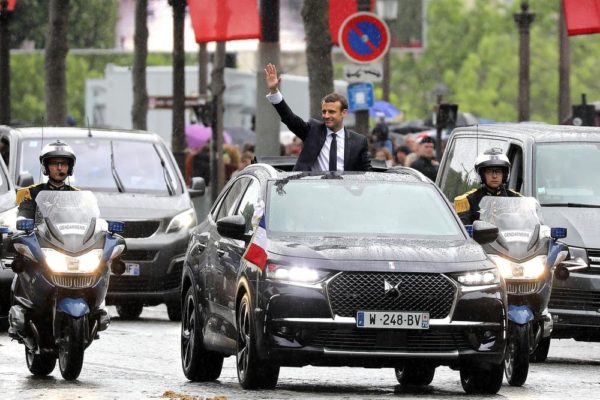