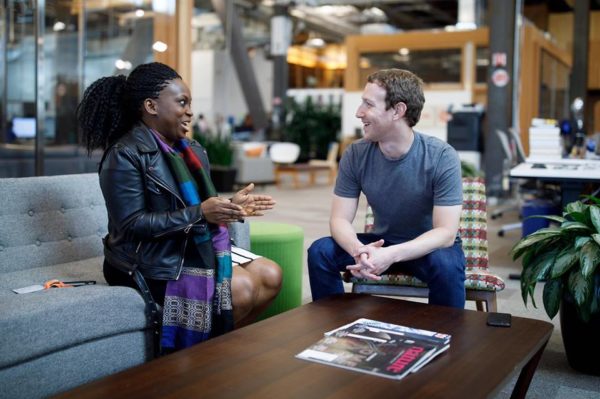 Facebook founder Mark Zuckerberg who has been meeting with different group admins that created meaningful communities on the platform, met with the Chicago-based Nigerian, Lola Omolola who founded the popular group Female In Nigeria (FIN).

The secret Facebook group which has over one million members (FINsters) is a platform where Nigerian females are allowed to be themselves without shame. It is a group for women to discuss everything; from marriage to career to sex and health issues amongst others.

The group has zero tolerance for judging or insults as it is solely meant to uplift one another.

Mark, who will be having the first ever Facebook Communities Summit with a few hundred top admins later this month in Chicago, shared a photo from his meeting with Lola.

“This summit will be the next chapter and we’ll discuss more of what we’re building to empower community leaders to bring the world closer together,” he wrote.

Over the past few weeks I’ve been meeting group admins across the country who are building meaningful communities on Facebook and will be at the summit. This photo is with Lola, who lives in Chicago and is originally from Nigeria. Two years ago, she founded a secret Facebook group called Female IN, or FIN. It’s a no-judgment space where more than a million women come to talk about everything from marriage and sex to health issues and work problems – and it’s helping end the culture of silence that exists for women in some parts of the world.

I’m looking forward to meeting more admins like Lola and talking about how we can help them do even more to build community. I’ll share more info on the summit as we get closer, and I’ll stream the event live from my profile later this month.

Lola also responded to Mark’s post, acknowledging his “relentless drive to connect our world”. She wrote:

Thank you so much Mark for this honorable mention.

Were it not for your relentless drive to connect our world and your assembly of the brightest minds in the universe to bring this dream to life, FIN would not have been probable.

Certainly not at this scale.

I’m an ordinary woman from modest means and your vision; our shared vision to advance meaningful connection, is now helping women across the world to find our voices through FIN; our non-judgmental Facebook support group.

Thank you for helping me create the world I wish to live in and have my 8 and 10 year old inherit.

Your outstanding team at Facebook, our indefatigable admin team and my irrepressible FINsters make this all possible.

Thank you! and see you in Chicago.

Dammy Krane Released on Bail, to Appear in Court June 23