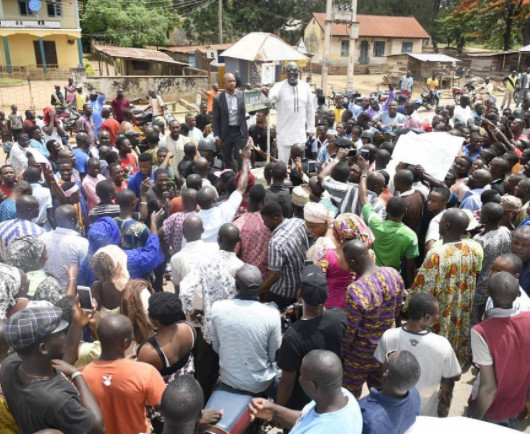 At a rally organized by the supporters of Kogi senator, Dino Melaye, gunshots have reportedly broken out.

Dino Melaye, who had attended the protest to address his supporters concerning plans to recall him from the Red Chamber, tweeted that an attempt was made on his life and two of his vehicles were severely damaged with gunshots. 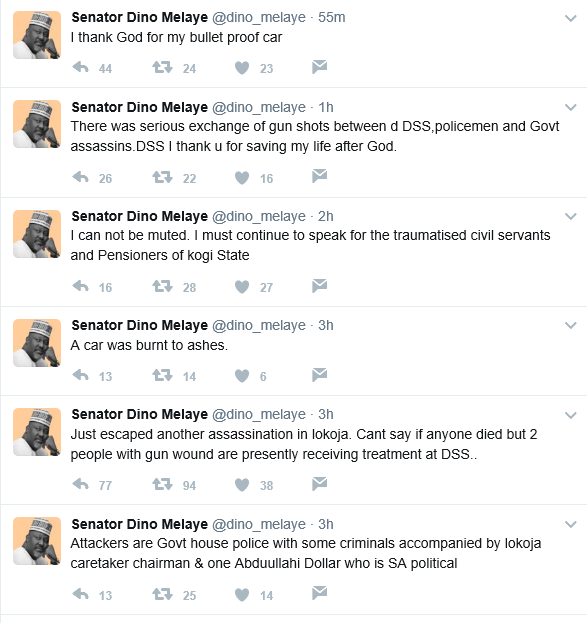 In several posts on Instagram, he accused the state governor Yahaya Bello, of sending “killers” to the rally.

Punch reports that gunshots between his supporters and those of the state governor that lasted for over one hour.

NAN reports that two persons were killed, when about 20 gunmen opened fire on him.

Dino was rounding off his speech at a mini rally in front of the Kogi State Polytechnic,  when the guns and cutlasses wielding hoodlums emerged from nowhere.

Vehicular traffic on Lokoja -Abuja highway was disrupted for almost one hour as motorists abandoned their vehicles to escape being caught in a cross fire.

Traders at Lokoja main market also hurriedly abandoned their wares to take cover in nearby bush and houses.

A student of the polytechnic, simply identified as Saka Seidu, and one other person, were killed while two of the DSS officials attached to Melaye received gunshot injuries.

The Rector of the polytechnic, Mohammed Yisah, confirmed the death of one of his students.

The senator’s black Prado Jeep was shattered with bullets and was towed to the state police command headquarters.

A Sienna car loaded with arms and ammunition believed to be one of the vehicles brought by the attackers was burnt completely when a shot from security agents hit it.

Melaye had on April 15, escaped death by whiskers, when his house at Ayetoro Gbede was attached by gunmen.

The Administrator of Ijumu Local Government and five other persons were arrested and charged to court for the attack.

Inalegwu said that the senator did not notify the police of his intention to hold the rally and called on politicians to give police adequate notice before holding any rally.

The state governor, Yahaya Bello who later visited the scene of the attack in company of the police Commissioner urged security agencies to investigate the incident with a view to bringing the culprits to justice.

The governor who also confirmed the death of one person in the incident and said that a report had earlier been made in February to the presidency, DSS and police about the intention of Melaye and his cohorts to case a breach of the peace.

He assured the people of the state of adequate security of their life and property , asking them to go about their daily activities as the situation had been brought under control.

The senator had earlier posted a video of him speaking at the protest on Instagram.

Exposing the lies of Sahara reporters. Video of pro Dino protest in Kabba

EFCC Raided our Office, Subjected us to Crude Intimidation, Psychological and Emotional Trauma – The Sun Staff