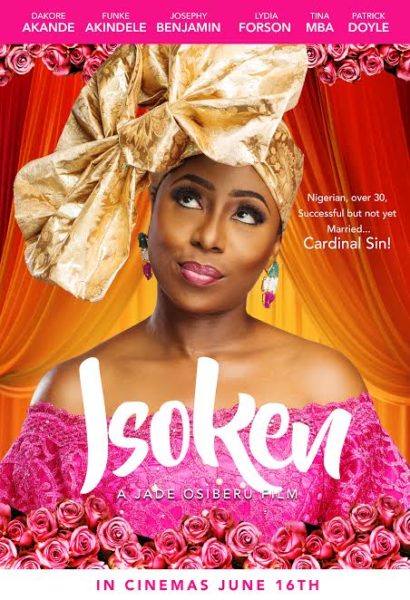 I first heard about the film via a reader’s comment on my last review of Omoni Oboli‘s film,  Okafor’s Law. A few weeks later I began seeing the trailers and observing the publicity trend on social media platforms. So, I took interest is seeing the film – majorly for two reasons.

Reason one: because I have a bosom friend called Isoken; reason two: the film shares a baseline of a story I once wrote – a grown single lady pressured by her Mum to get married… Thus, I went into the cinema screen with a mindset – If you’re gonna tell my kind of story, you better do it well…

The film ISOKEN tells the story of a young, successful and intelligent single lady in her mid-thirties pressured by her mum and relatives to get married. She was introduced to a classy, wealthy and cute Osaze, whose aura placed a demand on her sophisticated shade. Just as she goes with the flow, she coincidentally meets Kelvin, a young Briton whose love for the Nigerian culture from childhood transformed him into a humble and simple character – the perfect blend for Isoken. She had to make a decision between pleasing her mum and sticking to her heart’s choice…

Genre (Romance/Drama)
My parameters for review are;

Cinematography
Being a Hollywood film freak, it will be unfair for me to expect picture and sound as perfect as those from Universal Pictures or Disney Studios, considering the constraint provided by slim production budgets in our industry. However, I expected a better post production impact than what I saw. The pictures were dull (obviously converted from a source file with a substandard resolution); the voices were too deep – I almost thought Dakore had a masculine voice (thank God I have met her in person). Also the balancing of music under the dialogues were not well done. On Cinematography, I will give a 5/10.

Casting
Brilliant choice of cast, if you ask me. Dakore did a fantastic job in blending class with the simplicity of a well groomed lady from a mid-class home, as was the demand for the Isoken character.

To be candid, for the first time I saw her step out a bit from the routine total splendour, which she is renowned to depict. I saw a different Dakore and I think she did not struggle at all.

Other key acts succeeded in coming a bit above average, the best to me being Tina Mba. She nailed her motherly role perfectly – providing the humorous balance which Funke Akindele also tried to achieve.
Joseph Benjamin had quite a responsibility playing Osaze, He did well in his dialogues/scenes with the exception of the “this is bullshit…” part. Somehow, I imagined a back–in–the-day Desmond Elliot in that scene.

Another remarkable act was Marc Rhys. Unlike some unfortunate oyibos who have struggled to make sense in our Nollywood scenes, Marc did a fantastic job in his role – portraying the sarcastic dry humour akin to people of his race despite their fancy for culture.

Lydia Forson was fantastic, the best of the trio if you ask me. Damilola Adegbite was a bit mechanical. Patrick Doyle?….hmmm….I guess Epa was just having fun being himself. The pidgin sweet for en mouth no be small. On casting, I will give an 8/10.

Script
Jadesola Osiberu did a near fantastic job here. You could feel the femininity in the story, with detail to express that someone was writing from a familiar stand point. However, there were a few hiccups, such as Isoken exclaiming “Chineke!” rather than “Iheme” or “Osanobua!” like a proper Bini girl would do in her bid to express shock. She also should have given more lines to Isoken’s Uncle and Chuks. They sounded like potentials for better humour than Isoken’s younger brother. However, on the dialogues between Isoken and Osaze, Isoken and Kelvin, Isoken and friends, I’ll give a thumbs up! On dialogues generally, I will give a 7/10.

Plot
Not a projectile flow, but Jadesola succeeded in keeping viewers excited throughout despite having some unnecessary acts and scenes. For instance, Joke’s roles and scenes throughout were not necessary, except that the naming ceremony provided a meeting point for Kelvin and Isoken, an effort that could have been accomplished some other way. I am yet to figure out the need for Kukua’s argument with the boys on her way to pick up Isoken. If the point was to stress that ladies love successful men, enough of that was heard in the dialogue between Isoken and the trio at the spar.

One thing worth commending was the use of music to portray Kelvin’s love for culture. On that I feel like giving the writer a high five.

The wrap up almost looked like that of The Wedding Party, however I will sheath my sword since I heard from a reliable source that the project began before The Wedding Party. But hold on a minute! What was that reaction Isoken’s sister gave to her husband? What point was Jadesola trying to make?

Okay…. I will have said more, but let me park here. After all, the film was far better than some horrific projects we have seen on the big screen. On plotting, I will give a 6/10.

In conclusion, after seeing Isoken, I was reassured that filmmaking in the industry is becoming much better. I think you should grab a ticket at the nearest cinema to see Isoken (If you haven’t). At least, you will laugh….that is very important!

Jude Martins – Jude is a gifted writer, film critique and a public relations expert. His passion to articulate ideas date way back to his escapades as a young teenager; publishing His first article at age 13. He is committed to utilizing his prowess to inform, educate, inspire and communicate positivity to the society on topics relating to Entertainment, Politics and Inspirational thoughts. Jude is a Chartered Manager of the Nigeria Institute of Management and works with a Cinema in Lagos as an Operations Manager. JUDE MARTINS Email – [email protected] Tel - +234 (0) 8186671693, +234 (0) 8037332373