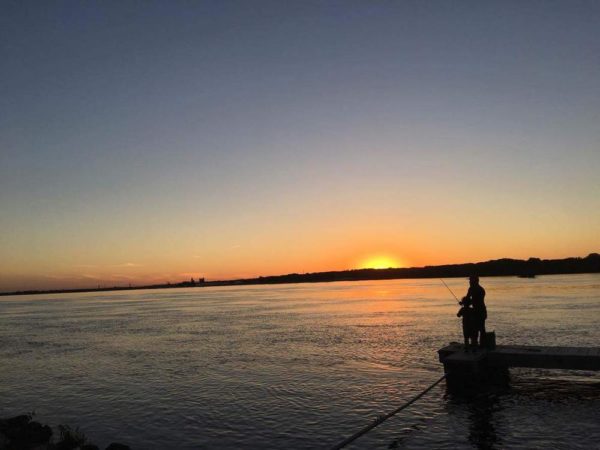 Jaden and Malik | Photo Via GoFundMe

A brave father died after jumping into the river trying to save his drowning son, and captured on camera is one of their final moments together.

Malik Williams had taken Jaden, his 6-year-old son fishing in the Mississippi River only two weeks after he welcomed his second child.

A 16-year-old passerby, Riley Gomez, in an interview by Inside Edition said she had found the moment beautiful and decided to take a photo of it.

“I was on the dock taking pictures of the sunset and I saw them,” Riley Gomez said.

After finding his son had fallen into the water, Malik jumped in after him to save him, forgetting he didn’t know how to swim.

Another passerby in and grabbed Jaden from Malik… He tried to save them both but he hardly knew how to swim himself. By the time Jaden got out, Malik was taken by the current.

Sadly, Malik’s body is yet to be found.

“He seemed like an amazing father — he knew he couldn’t swim and he sacrificed his life to save his child. He’ll always be remembered as a hero. Knowing that there was one last thing I was able to give to that family, I’m really glad I did take that picture,” Gomez said.

A GoFundMe account has been set up to help support Malik’s fiancee Heather, Jaden and his 2-week old brother Joziah.

“Malik’s first instinct was to save his baby, so he jumped in not knowing how to swim trying to do everything he could to save Jaden,” the account statement says.

Winning Bidder Gives Up $2.6m for Lunch with Warren Buffett