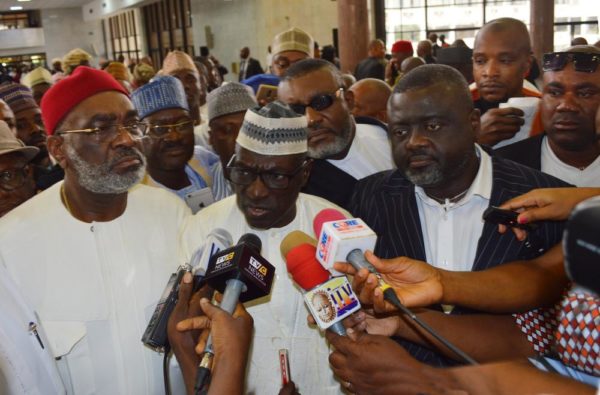 Pic.1. Caretaker committee chairman of PDP, Sen. Ahmed Makarfi speaking to newsmen after Supreme Court sitting in Abuja on Wednesday (12/7/17) sacked the National Chairman of the opposition of the, Sen. Ali Modu Sheriff. With him are Sen. Ben Obi (L) and Rep. Jones Onyereri.
03460/11/7/2017/Ernest Okorie/BJO/NAN

The Supreme Court of Nigeria on Wednesday declared Ahmed Makarfi as the National Leader of the People’s Democratic Party (PDP).

The court, giving the ruling, sacked Ali Modu Sheriff, stating that the Makarfi-led committee is the authentic leadership of the party.

The Makarfi-led caretaker committee of the party had on March 16, filed the appeal against Sheriff’s position.

The Court of Appeal in Port Harcourt on February 27 declared Sheriff as the legitimate national chairman of the party.

However, in its judgment, Justice Bode Rhodes Vivour held that the appeal had merit.

The presiding Justice further held that the National Convention of the party held on May 21, 2016 was validly convened in line with the party’s constitution.

“Sets of documentary evidence before the court have shown that Sheriff’s appointment as acting chairman of the party ended with the resolution from the convention. The National Conventions of Political Parties are the supreme organs which control every other organs of the party. In the light of this, the highest organ of the party did not breach any laws by dissolving the national executive committee headed by Sheriff at that convention,’’ he said.

According to the court, the appointment of Makarfi-led caretaker committee is in line with the constitution of the party.

“The caretaker committee of the PDP led by Senator Ahmed Makarfi is hereby affirmed as the authentic national leadership of the party. The judgment of the Court of Appeal, Port Harcourt Division delivered on Feb.27 is hereby set aside,’’ he held. 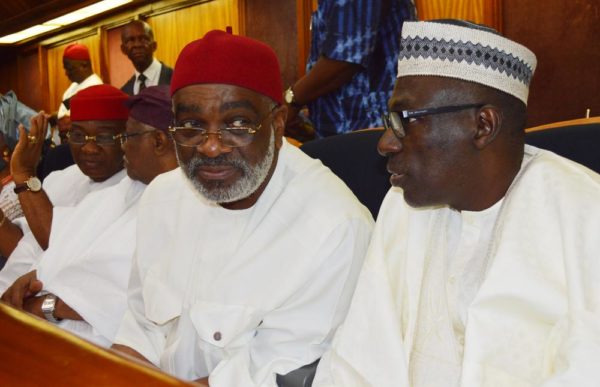 Punch reports that the Deputy Senate President Ike Ekweremadu, commenting on the ruling, said that the victory is a collective one for the party, and there is no victor or vanquished.

I am happy that the Supreme Court has brought this protracted leadership tussle to an end today. There is no victor and there is no vanquished, but a collective victory for our party and the nation’s democracy. No democracy can prosper in the absence of a virile opposition or under the extreme hardship Nigerians have faced over the past two years. Citizens deserve a viable alternative.

The ruling party has indeed profited from the prolonged power contest, not just in terms of defections, but also in the unchallenged degeneration of democratic values, rule of law, electoral practice, and the economy because the PDP has been too distracted to keep them on their toes.

But, it is heartwarming that calm is returning after the storm. I salute millions of our party faithful and Nigerians who stood firm to weather the storm for their courage and loyalty, and sincerely appeal to those who left for one reason or the other to return to our big political family.

Importantly, I call on our party leaders and elders to immediately initiate an all-inclusive peace, reconciliation, and rebuilding process to reunite everybody under the big umbrella and reinvigorate the biggest party in Africa to bounce back to the rescue of the suffering masses of Nigeria come 2019. 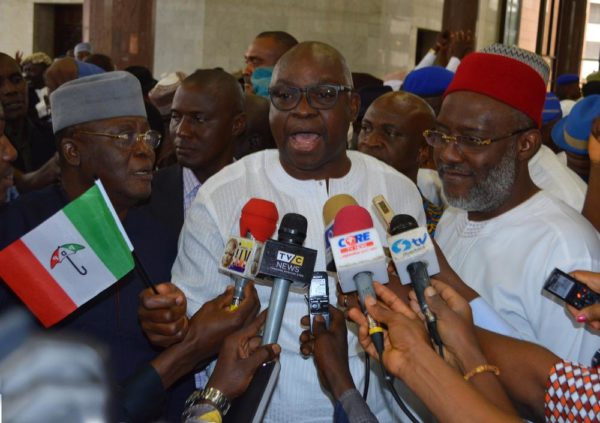 Former Minister Femi Fani-Kayode also commented on the ruling in a post on Twitter, congratulating the party.

Praise the Lord! God has given us victory at Supreme Court. PDP is back in the right hands. Shame on Ali Modu Sheriff! Congrats to PDP!

Praise the Lord! God has given us victory at Supreme Court. PDP is back in the right hands. Shame on Ali Modu Sheriff! Congrats to PDP!

The Appeal Court had earlier sacked Ahmed Makarfi as the Caretaker Chairman of the PDP.

UPDATED: For our BellaNaijarians in London! Here’s How YOU Can Attend Amara Kanu’s Exclusive Book Launch on the 14th of July