Recently, 50 Cent announced his new late night talk show coming to BET which will be featuring a lot of black comedians.

The rapper took to Instagram and fired shots at an unnamed TV series (we’re guessing Empire) he described as the primary competition for his Starz TV series Power, implying that the show was getting irrelevant and he was going to take over BET.

Remember that other show that thought they were in competition with POWER, what happened to it? I don’t hear anyone talking shit anymore. ?Now I’m gonna take over BET. LOL #50Centralbet

A short while later, Gabrielle Union, who stars in her own BET series, Being Mary Jane, responded to 50 cent’s caption, saying that the rapper should abstain from negativity and that there was enough space for everyone to shine. 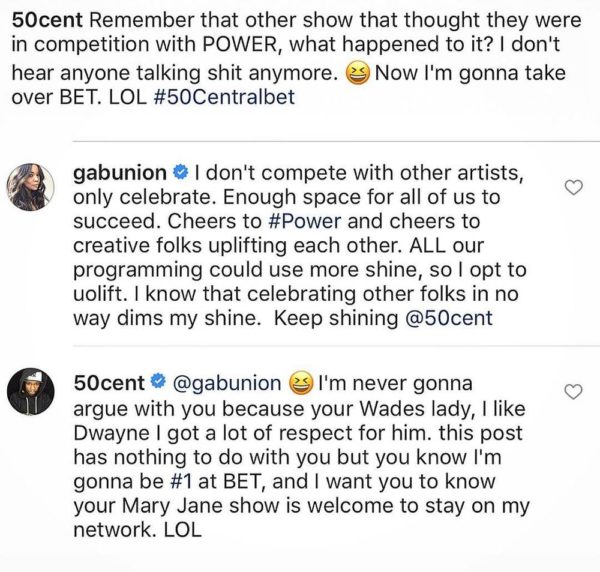 The controversial actor who plays Kanan in Power quickly took a screenshot of her comment, which he replied to with another contentious caption

You keep it up I’m a tell Dwyane, because I feel like your picking a fight with me. He ain’t gonna like this s**t. LOL #50Centralbet

You keep it up I’m a tell Dwyane, because I feel like your picking a fight with me. He ain’t gonna like this shit. LOL #50Centralbet

The rapper is known for stirring up drama, he pulled a similar stunt in June when he compared Empire to American comedy series Glee.

Watch the Full Highlights Reel of The Voice Nigeria Episode 8