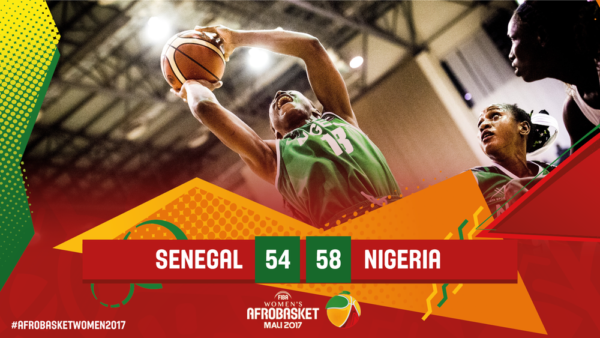 Nigeria defeated Senegal, the reigning Champions in Women Afrobasket by 54-58 points in their last Group B match of 2017 Afrobasket on Wednesday night in Bamako, Mali. The win means Nigeria’s D’Tigress finished top of the group and progressed to the Quarter-finals with ease, FIBA reports.

The match was regarded as a crucial one by many observers who followed performances of Nigeria’s D’Tigress since the beginning of the tournament and Senegal’s record in the last 10 years.

The first quarter was lost by Senegal as it ended 13 points to 14 points, while Nigeria powered past in the second quarter with additional 20 points and Senegal got 13 points despite competing against giant opponents.

Senegal won the last quarter of the match by picking 13 points ahead of Nigeria’s 10 points, it was a pyrrhic victory for them as D’Tigress won the score board.

The defending champion ensured that third quarter was a dog fight where they managed to get 15 points against Nigeria’s 14 points.

Evelyn Akhator, the forward player with Dallas Wings of Women National Basketball Association (WNBA), U.S. maintained her status as the highest scorer of the match with 15 points. She also got 13 rebounds and five assists in the fiercely contested battle while Aya Traore got 13 points, eight rebounds and two assists for Senegal.

In a related development, D’Tigress players had attributed their impressive performance in Mali to improved welfare package provided by the new board of Nigeria Basketball Federation (NBBF).

They commended Musa Kida-led board of NBBF for motivating the team during their camping in Lagos and the prompt payment of allowances few days after arriving in Bamako.

According to them, nothing works better in motivating players for any major competition than prompt payment of allowances and bonuses despite their willingness to serve their fatherland.