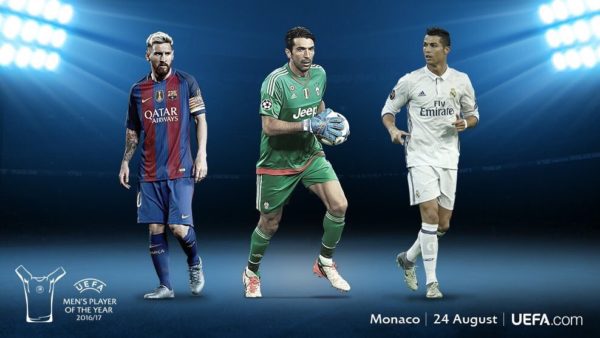 Italy and Juventus goalkeeper Gianluigi Buffon has been named as one of three nominees for the 2016/17 UEFA Men’s Player of the Year Award alongside Lionel Messi and Cristiano Ronaldo, European football’s governing body (UEFA) announced on Tuesday.

The 39-year-old goalkeeper was a key member of the impressive Juventus side that reached last season’s UEFA Champions League final in Cardiff but missed out on a first winner’s medal as the Italians were defeated 4-1 by Real Madrid.

The award will be presented at the 2017/18 UEFA Champions League group stage draw in Monaco on Thursday 24 August.

The shortlist was decided by the 80 coaches of the clubs that played in the Champions League and Europa League group stages, as well as 55 journalists.

Messi and Ronaldo have won the award on two occasions respectively while Spain midfielder Andres Iniesta won the honour in 2012, followed by French winger Franck Ribery a year later.

Luis Suarez who scored 37 goals in all competition last season and new world record signing Neymar missed out of the list this year.

The players who make up the rest of the top 10 are: