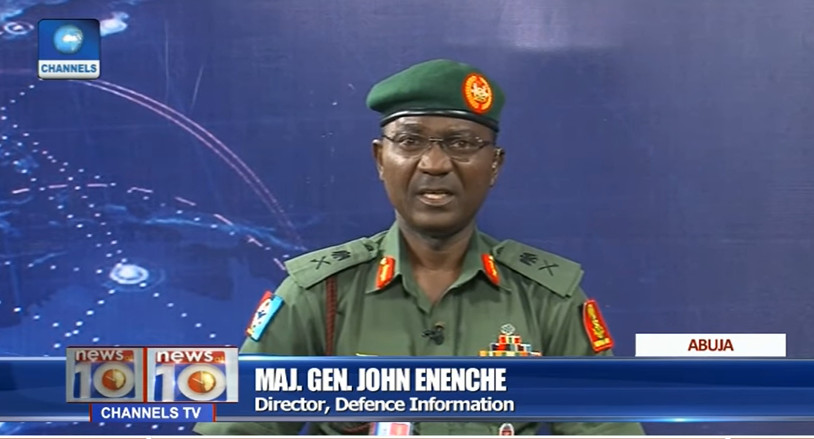 When he was a guest on Channels Television’s News AT 10, Director of Defence Information, Maj.-Gen. John Enenche, disclosed that the military now monitors social media to sieve out and react to anti-government, anti-military, and anti-security speeches and fake news.

Speaking on the challenge of social media being used as a means of propagating hate speech and false news, Enenche said “It is a double-edged sword and we are also having a bit of it.”

“Imagine when the President came back and addressed the nation, not up to 30 minutes later, a fake speech of the Commander-In-Chief was being circulated in order to do what? To derail the people. If you are not very sharp and if you didn’t listen to the speech or you don’t have a copy of it like I had it almost immediately, you wouldn’t know. So, looking at it from that perspective, it is a challenge everywhere.

What are we doing? In the military, we are now taking on it more seriously than ever. We have our strategic media centres that monitor the social media to be able to sieve out and react to all the ones that will be anti-government, be anti-military, (and) be anti-security.

We tackle them appropriately with appropriate responses. Ahead of that, we are also proactive. We have measures in place, scientific measures to be able to sieve this information and also to get the public and let them know that some of this information they are getting is not genuine are not true and their objective is an anti-corporate existence of this country,” the military chief said.

Enenche, who was speaking on military operations in the north east, and the rise of the insurgents’ attack said:

“Like I have said before, it is not unexpected being that they have been degraded, decimated and really busted at camp zero and other cities there through the air bombardment and raids by members of the military, particularly the army. So you will see them spreading out like ants that have been busted from an anthill.”

“However, I want to assure the general public and Nigerians that measures are in place to begin to take on them and begin to take them out. However highly placed anyone is or any insider or collaborator is, we are on top of the situation and we are beginning to get our information to begin to handle them appropriately,” he added.