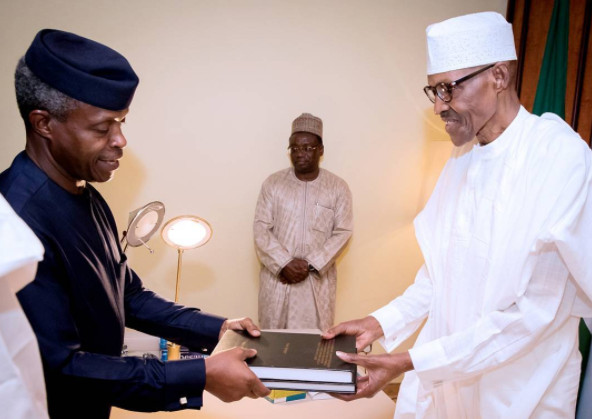 President Muhammadu Buhari receiving the report of the Probe Panel on the suspended Secretary to the Government of the Federation (SGF) Babachir Lawal and Director-General of National Intelligence Agency (NIA) Ayodele Oke from Chairman of the Panel, Vice President Yemi Osinbajo, at the Presidential Villa in Abuja on Wednesday.

The committee that investigated the Secretary to the Government of the Federation, Babachir Lawal and the Director General of the National Intelligence Agency (NIA), Ayo Oke, has submitted its reports.

Osinbajo told State House correspondents that the president would study and take decisions based on the submitted report.

“This is a report which contains recommendations to the President. It is a fact finding committee as you know and what our terms of reference were, were to find out, based on the facts that we had available to us and based on interview of witnesses, what transpired in both cases that were before us.

Prompted to give insight into the recommendations, Osinbajo said: “Of course I cannot give you any kind of details because the President has to look at it. He has to study the report and then make his own decisions based on that report.”

He added: “We are always fair minded and the whole approach is to ensure that justice is done in all cases. It is in the interest of the government and also in the interest of the nation that things are done properly, that there is due process. That is the proper thing to do and you can be sure that we will do the right thing.”

The committee was set up to investigate allegations of financial misappropriation in the distribution of relief to IDPs in Borno involving Lawal and the finding of a huge amount of foreign currency in an apartment in Lagos linked to Ayo.

The committee was set up on April 19 and given two week to complete the assignment and report back, but it sought for an extension that was granted.

Submission of the report, however, had to be postponed until the President’s return from medical treatment in London.