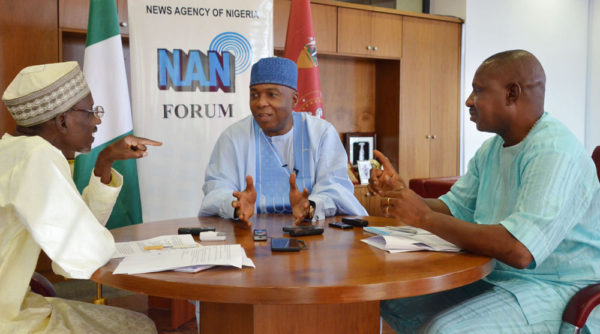 President of the Senate, Bukola Saraki, was the latest guest at the the News Agency of Nigeria (NAN) Forum in Abuja on Tuesday.

Saraki, speaking on to senate’s rejection of Ibrahim Magu as chairman of Economic and Financial Crimes Commission (EFCC), said contrary to insinuations, the Senate had no pre-meditated plan to do that.

He said that the screening of Magu, which led to his rejection, was transparently done.

According to him, Magu’s rejection was prompted by report from the Department of State Services (DSS), among other issues, and the screening was aired “live’’ on national television for all Nigerians to watch.

“I think there is a lot of misunderstanding and blackmail and all is not in the interest of democracy.

The rejection of candidates presented to the National Assembly is a process. It is a process that is not restricted to the EFCC chairman.

It is a process that has to do with the Governor of Central Bank, Director-General of Lottery Commission, Electricity Regulatory Commission and other relevant agencies.

We have approved many people from the executive and we have rejected some and when we reject them, it is not for any personal reason, because it is a process.

Magu’s screening was on a Wednesday when we air plenary live. That is to show you how transparent the Senate was on Magu’s confirmation.

We screened him on a Wednesday so that all Nigerians can watch,” he said.

Saraki maintained that the decision of the Senate to reject the confirmation of Magu was in the interest of democracy.

He added that the decision was based on a test which he failed, adding that if the senate had disregarded the DSS report and went ahead to confirm Magu, posterity would judge the members.

“This is about an institution; let us say you are screening the Governor of Central Bank and EFCC reports that the man lacks integrity and that he is not honest, will you just discard that.

Even if you do, years later you are weakening that institution. We should stop talking about personalities. We should be focusing on how to strengthen our democracy.

When some people have particular interest, they will try and bring this down to individuals. There is nothing personal on the personality of the acting Chairman of EFCC.

As an individual, I have had a personal experience with Magu where he stood up for what was right.

I remember during the former President Goodluck Jonathan’s administration, where because we were fighting some of the issues then, some of us were sent to the EFCC.

I remember I was sent to Magu’s office. They were trying to get him to investigate something of 10 years, 12 years ago; I remember Magu said nobody was going to use him,” Saraki said. 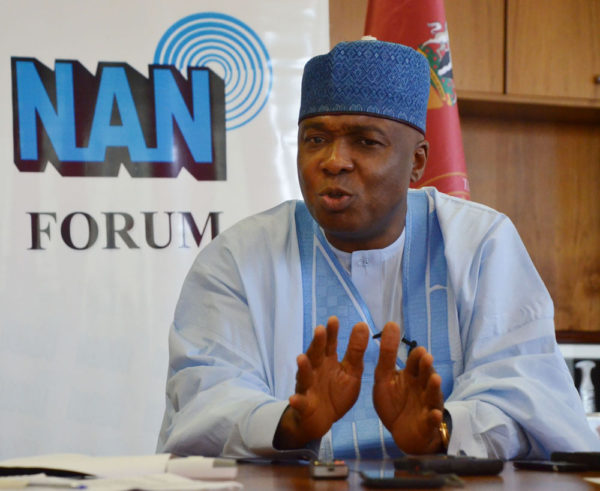 On allegations that Magu’s confirmation was stalled for fear that senators may be prosecuted by him, Saraki said it was far from the truth.

He pointed out that the fear that some of the former governors who had cases to answer may have contributed to the rejection was unfounded.

According to him, some of the former governors already had cases before the courts, and Magu, even if he was confirmed, couldn’t have gone to the courts to withdraw the cases.

He described the allegation as cheap blackmail, and said that Nigerians had to decide whether or not they wanted to strengthen the National Assembly as an institution.

The president of the senate said that going by democratic practice, there was a need for checks and balances, adding that the parliament had the power to confirm or not to confirm nominees.

“The days I confirm I don’t commit a crime, but the day I don’t confirm, all hell will break loose. It is very unfortunate. When people say we don’t want to fight corruption, does fighting corruption start and end with an individual? It doesn’t.

We have played our role. We will leave posterity to judge us. It was aired live. It wasn’t that we did it at night or in a close-door and then announced the result to the public.

They saw it. You can ask them if it looked as if this gentleman was not given fair hearing or something. Our argument is, today it is Magu, and tomorrow it could be a president.

Today we have an honest, transparent president, tomorrow we could have a corrupt and dishonest president, who brings his best man to be the governor of Central Bank and together they want to connive and steal money.

When the name is taken to senate and senate rejects it, the president will say, ‘my friend, continue.’

So it is about systems and processes. Whether you like Saraki or you don’t like Ekweremadu, it is not about us. By the end of our tenure we will go. It is about the institution,” he said.

Saraki further said “we cannot belittle or weaken the institution because it is that institution that separates democracy from dictatorship.

“When you weaken the parliament, you have weakened democracy.

“If you think by so doing you are weakening Saraki, you are not, it is the institution.’’

He said that the hatred for the parliament was fuelled by some people with vested interest in what they could benefit, while pretending to be fighting for the system.

Saraki, however, assured that the 8th senate will not be distracted by anyone or issue, adding that the chamber had passed no fewer than four anti-corruption bills to support the government.