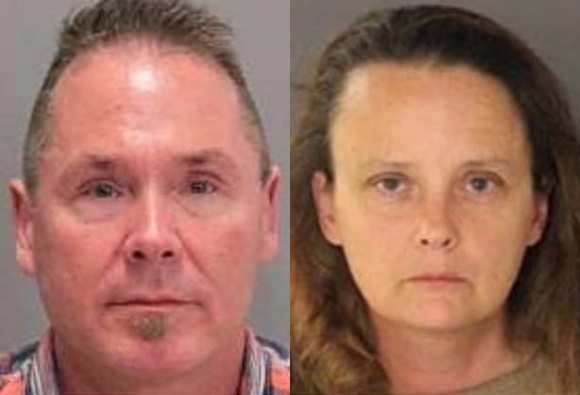 A plane passenger helped to stop the potential rape of two young children after reading suspicious text messages over the shoulder of the passenger seated in front of her.

San Jose Police said that the woman was flying from Seattle to San Jose on Monday when she noticed the passenger sitting directly in front of her sending repulsive texts about sexually molesting young children.

What she saw on Michael Kellar‘s (pictured above, left) phone prompted her to use her own smartphone to photograph the screen as evidence, and quietly alert cabin crew.

It was in large font, and she sees certain words and starts contemplating there’s something bigger there. Then the conversation transitions to children. That’s the moment when she decided to preserve the evidence as best as she could.

According to San Jose police, the woman had prevented a “horrific” and “catastrophic” crime against the two children.

“The conversations were very particular in regards to sex acts that were to be performed on children. Some of the sex acts talked about not only molesting children, but performing bestiality,” the spokesperson said.

The police were then able to use evidence from the 56-year-old’s phone to track down the home of the woman he was texting with. The woman, Gail Burnworth (pictured above, right), and Kellar both reside in Tacoma, Washington.

According to investigators, Burnworth who reportedly works as a babysitter, was carrying out Kellar’s sexual requests on two children, a 5-year-old and 7-year-old, whom the police have identified as victims.