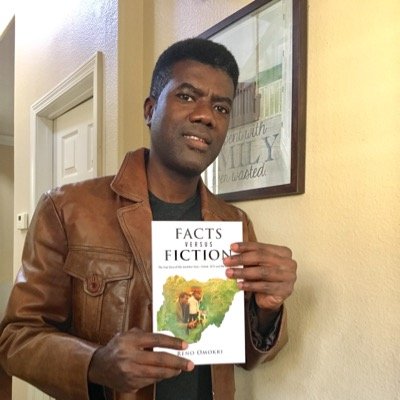 Reno Omokri, a former media aide to ex president Goodluck Jonathan has said that the Department of State Security (DSS) detained a distributor of his book “Facts Versus Fiction: The True Story of the Jonathan Years, Chibok, 2015 and Other Conspiracies” at Nnamdi Azikiwe Airport, Abuja.

According to Vanguard, the distributor “who bears a striking resemblance with Omokri got to the airport to pick the cargo, he was accosted by a customs agent who began interrogating him until a DSS agent came up to him and took over the interrogation.”

“The DSS agent kept asking, ‘are you the author?’ to which he responded in the negative. At which point, he was detained and taken to an office with four or five other people in it. After some minutes, he heard the DSS agent discussing his fate in an adjoining room, so he began moving to the door, which had been left ajar, and then bolted,” Vanguard quoted Omokri as saying.

Vanguard also reports that in a voicemail sent in by the distributor, the officers kept asking “Are you the author?” “Where is the author?” and “where is your passport?”, adding that he told them he is not the authot and the author is not in the country.

Omokri, who sanctioned the story, shared a link to the Vanguard post with the caption: “What have I done to the Muhammadu Buhari administration to deserve this? Did I lie in the book? If I did then sue me for libel! What is Nigeria coming to?” on Facebook.

“His health has improved tremendously” – Dogara after visit to Buhari