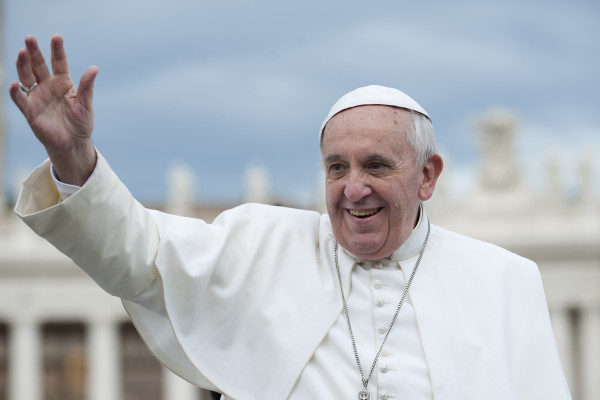 Pope Francis began the last day of his visit to Colombia with a hitch after he bumped his head against the vehicle barrier when he lost balance while riding in the popemobile.

Pope Francis, the first Latin American pope, was on a visit to the country after its over 50 years civil war, Guardian reports.

The 80-year-old pope was leaning outside a glass panel in front of him when the vehicle stopped and he lost balance and bumped his face against the barrier.

The bump cut his left eyebrow, the blood staining his white cassock.

A spokesman of the Vatican said the pope was fine and receiving ice treatment.

With a bandage over the cut, the pope himself appeared fine, making light of the incident, saying: “I was punched. I’m fine.”

Later in the day, the bruise swollen and the skin under his eye blackened, Pope Francis addressed hundreds of thousands of people, saying:

If Colombia wants a stable and lasting peace, it must urgently take a step in this direction, which is that of the common good, of equity, of justice, of respect for human nature and its demands.

Only if we help to untie the knots of violence, will we unravel the complex threads of disagreements

See a video of the incident below:

Pope Francis jokes that he was "punched" after he cut his eyebrow when he bumped into the window of his popemobile https://t.co/7rDgqyVAAq pic.twitter.com/cFNsgnJxZM

President Buhari to travel to the US – Presidency