Last night, a Twitter user @kiiinglola called out another user @badmansauce on the platform who sent her a DM, asking for money.

She shared screenshots of their conversation where she asked him if he was serious in which he replied in the affirmative.

When she told him she had nothing to say to him, he asked that if she can’t help, she should not rub it on his face.

See what transpired below:

@kiiinglola shared the screenshots with a short thread:

Twitter user expressed different opinions on the matter. Some supported her for calling out a “pest/scammer,” others called her out for embarrassing the user by sharing screenshots of their conversation, while others blamed the both of them – the guy, for asking for money with first conversation with someone, and the lady, for responding the way she did, and calling him out on her timeline.

Some other users have also contacted @badmansauce to assist him with money.

@badmansauce has reacted to the development, saying he actually sent the message and wasn’t hacked. He added that he did because he was “scared and ashamed” of himself. 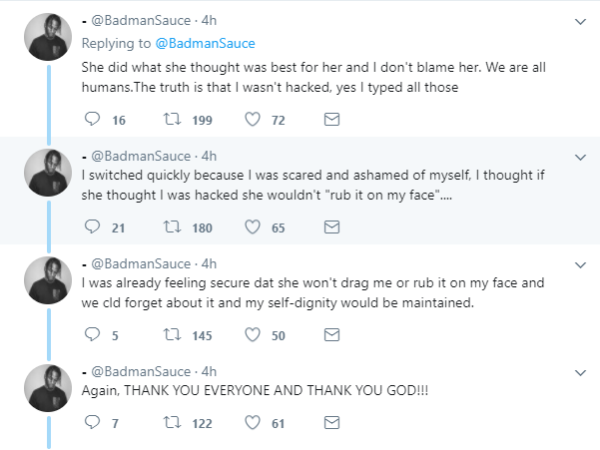 BellaNaijarians, what are your thoughts?

Related Topics:Asking for Money on Social MediaTwitter NG
Up Next

Webcoupers: Different Marketing Strategies to Help You Grow Your Business